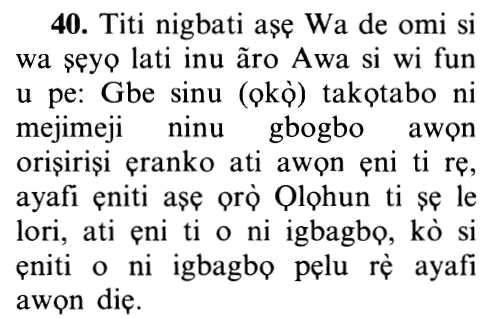 (So it was) till when Our command came and the oven gushed forth (water like fountains from the earth).

This was the promise of Allah to Nuh , when the command of Allah came, the rain was continuous and there was a severe storm which did not slacken or subside, as Allah said,

So We opened the gates of the heaven with water pouring forth. And We caused springs to gush forth from the earth. So the waters (of the heaven and the earth) met for a matter predestined. And We carried him on a (ship) made of planks and nails. Floating under Our Eyes: a reward for him who had been rejected! (54:11-14)

In reference to Allah's statement, وَفَارَ التَّنُّورُ (and the oven gushed forth), It is related from Ibn Abbas that he said,

"At-Tannur is the face of the earth.''

This verse means that the face of the earth became gushing water springs. This continued until the water gushed forth from the Tananir, which are places of fire. Therefore, water even gushed from the places where fire normally would be.

This is the opinion of the majority of the Salaf (predecessors) and the scholars of the Khalaf (later generations).

We said: "Embark therein, of each kind two (male and female),

At this point, Allah commanded Nuh to select one pair from every kind of creature possessing a soul, and load them on the ship.

Some said that this included other creatures as well, such as pairs of plants, male and female.

It has also been said that the first of the birds to enter the ship was the parrot, and the last of the animals to enter was the donkey.

and your family -- except him against whom the Word has already gone forth.

This means, "Load your family upon the ship.''

This is referring to the members of his household and his relatives, except him against whom the Word has already gone forth, for they did not believe in Allah. Among them was the son of Nuh, Yam, who went in hermitage. Among them was the wife of Nuh who was a disbeliever in Allah and His Messenger.

and those who believe.

And none believed with him, except a few.

This means that only a very small number believed, even after the long period of time that he (Nuh) was among them -- nine hundred and fifty years.

It is reported from Ibn Abbas that he said,

"They were eighty people including their women.''