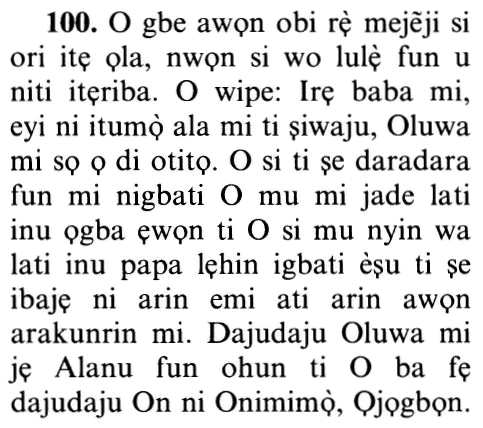 And he raised his parents to Al-'Arsh,

According to Ibn Abbas, Mujahid and several others,

he raised them to his bedstead where he sat.

and they fell down before him prostrate.

Yusuf's parents and brothers prostrated before him, and they were eleven men,

And he said: "O my father! This is the Ta'wil (interpretation) of my dream aforetime...'',

in reference to the dream that he narrated to his father before, إِنِّي رَأَيْتُ أَحَدَ عَشَرَ كَوْكَبًا (I saw (in a dream) eleven stars...). (12:4)

In the laws of these and previous Prophets, it was allowed for the people to prostrate before the men of authority, when they met them. This practice was allowed in the law of Adam until the law of `Isa, peace be upon them, but was later prohibited in our law.

Islam made prostration exclusively for Allah Alone, the Exalted and Most Honored. The implication of this statement was collected from Qatadah and other scholars.

When Mu`adh bin Jabal visited the Sham area, he found them prostrating before their priests. When he returned (to Al-Madinah), he prostrated before the Messenger of Allah, who asked him,

Mu`adh said, "I saw that they prostrate before their priests. However, you, O Messenger of Allah, deserve more to be prostrated before.''

Therefore, this practice was allowed in previous laws, as we stated.

This is why they (Yaqub and his wife and eleven sons) prostrated before Yusuf, who said at that time,

O my father! This is the Ta'wil of my dream aforetime! My Lord has made it come true!

using the word, `Ta'wil', to describe what became of the matter, later on.

meaning, on the Day of Judgement what they were promised of good or evil will surely come to them.

My Lord has made it come true!

mentioning that Allah blessed him by making his dream come true,

He was indeed good to me, when He took me out of the prison, and brought you (all here) out of the Bedouin life,

out of the desert, for they lived a Bedouin life and raised cattle, according to Ibn Jurayj and others.

He also said that they used to live in the Arava, Ghur area of Palestine, in Greater Syria.

after Shaytan had sown enmity between me and my brothers. Certainly, my Lord is the Most Courteous and Kind unto whom He wills.

for when Allah wills something, He brings forth its reasons and elements of existence, then wills it into existence and makes it easy to attain,

Truly, He! Only He is the All-Knowing.

what benefits His servants,

in His statements, actions, decrees, preordainment and what He chooses and wills.