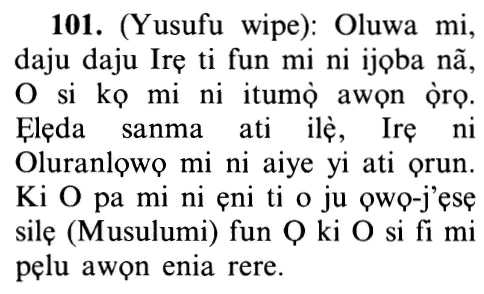 Yusuf begs Allah to die as A Muslim

"My Lord! You have indeed bestowed on me of the sovereignty, and taught me something of the interpretation of dreams - the (Only) Creator of the heavens and the earth! You are my Wali in this world and in the Hereafter. Cause me to die as a Muslim, and join me with the righteous.''

This is the invocation of Yusuf, the truthful one, to his Lord the Exalted and Most Honored. He invoked Allah after His favor was complete on him by being reunited with his parents and brothers, after He had bestowed on him Prophethood and kingship.

He begged his Lord the Exalted and Ever High, that as He has perfected His bounty on him in this life, to continue it until the Hereafter.

He begged Him that, when he dies, he dies as a Muslim, as Ad-Dahhak said, and to join him with the ranks of the righteous, with his brethren the Prophets and Messengers, may Allah's peace and blessings be on them all.

It is possible that Yusuf, peace be upon him, said this supplication while dying.

In the Two Sahihs it is recorded that A'ishah, may Allah be pleased with her, said that while dying, the Messenger of Allah was raising his finger and said - thrice,

It is also possible that long before he died, Yusuf begged Allah to die as a Muslim and be joined with the ranks of the righteous.