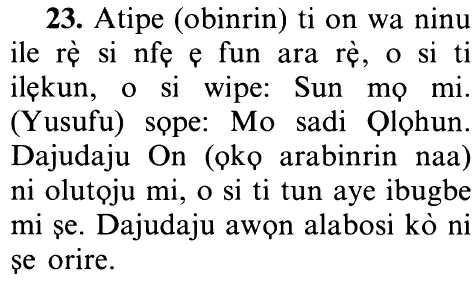 Wife of the `Aziz loves Yusuf and plots against Him

And she, in whose house he was, sought to seduce him (to do an evil act), and she closed the doors,

Allah states that the wife of the Aziz of Egypt, in whose house Yusuf resided and whose husband recommended that she takes care of him and be generous to him, tried to seduce Yusuf! She called him to do an evil act with her, because she loved him very much. Yusuf was very handsome, filled with manhood and beauty. She beautified herself for him, closed the doors and called him,

But he categorically refused her call,

He said: "I seek refuge in Allah! Truly, he is my Rabb! He made my living in a great comfort!''

as they used to call the chief and master a `Rabb', Yusuf said to her, `your husband is my master who provided me with comfortable living and was kind to me, so I will never betray him by committing immoral sins with his wife,'

Verily, the wrongdoers will never be successful.

This was said by Mujahid, As-Suddi, Muhammad bin Ishaq and several others.

The scholars differ in their recitation of, هَيْتَ لَكَ (Hayta Laka), whereby Ibn Abbas, Mujahid and several other scholars said that it means that;

she was calling him to herself.

Al-Bukhari collected this statement from Ikrimah without a chain of narration.

Other scholars read it with the meaning,

Ibn Abbas, Abu Abdur-Rahman As-Sulami, Abu Wa'il, Ikrimah and Qatadah were reported to have read this part of the Ayah this way and explained it in the manner we mentioned, as `I am ready for you'.