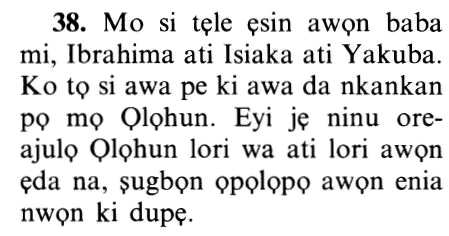 "And I follow the ways of my fathers,- Abraham, Isaac, and Jacob; and never could we attribute any partners whatever to Allah: that (comes) of the grace of Allah to us and to mankind: yet most men are not grateful.
And I follow the religion of my fathers, Ibrahim and Ishaq and Yaqoub; it beseems us not that we should associate aught with Allah; this is by Allah's grace upon us and on mankind, but most people do not give thanks:
And I have followed the religion of my fathers, Abraham and Isaac and Jacob. It never was for us to attribute aught as partner to Allah. This is of the bounty of Allah unto us (the seed of Abraham) and unto mankind; but most men give not thanks.

And I have followed the religion of my fathers, - Ibrahim, Ishaq and Yaqub,

Yusuf said, `I have avoided the way of disbelief and polytheism, and followed the way of these honorable Messengers,' may Allah's peace and blessings be on them.

and never could we attribute any partners whatsoever to Allah. This is from the grace of Allah to us and to mankind,

this Tawhid -Monotheism-, affirming that there is no deity worthy of worship except Allah alone without partners,

is from the grace of Allah to us,

He has revealed it to us and ordained it on us,

to whom He has sent us as callers to Tawhid,

but most men thank not.

they do not admit Allah's favor and blessing of sending the Messengers to them, but rather,

Have changed the blessings of Allah into disbelief, and caused their people to dwell in the house of destruction. (14:28)