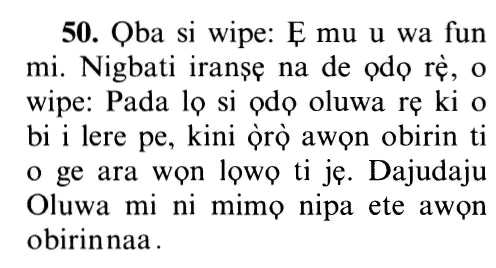 The King investigates what happened between the Wife of the Aziz, the Women in the City, and Yusuf

The king said: "Bring him to me.

`Release him from prison and bring him to me.'

But when the messenger came to him, (Yusuf) said: "Return to your king,

When the king's emissary came to Yusuf and conveyed the news of his imminent release, Yusuf refused to leave the prison until the king and his subjects declare his innocence and the integrity of his honor, denouncing the false accusation that the wife of the Aziz made against him. He wanted them to know that sending him to prison was an act of injustice and aggression, not that he committed an offense that warranted it. He said, ارْجِعْ إِلَى رَبِّكَ (Return to your lord (i.e. king...),

The Sunnah of our Prophet praised Prophet Yusuf and asserted his virtues, honor, elevated rank and patience, may Allah's peace and blessings be on him.

The Musnad and the Two Sahihs recorded that Abu Hurayrah said that the Messenger of Allah said,

We are more liable to be in doubt than Ibrahim when he said,

And may Allah send His mercy on Lut! He wished to have powerful support! If I were to stay in prison for such a long time as Yusuf did, I would have accepted the offer.

In another narration collected by Ahmad from Abu Hurayrah, the Prophet said about Yusuf's statement,

"...and ask him, `What happened to the women who cut their hands Surely, my Lord (Allah) is Well-Aware of their plot.'''

If it was me, I would have accepted the offer rather than await my exoneration first.