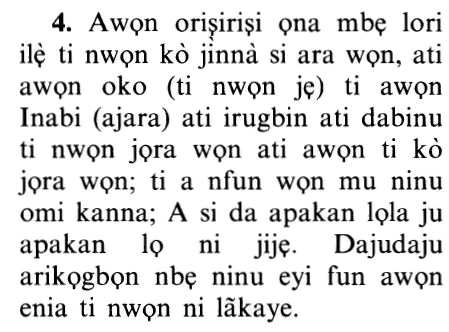 And in the earth are tracts (diverse though) neighbouring, and gardens of vines and fields sown with corn, and palm trees - growing out of single roots or otherwise: watered with the same water, yet some of them We make more excellent than others to eat. Behold, verily in these things there are signs for those who understand!
And in the earth there are tracts side by side and gardens of grapes and corn and palm trees having one root and (others) having distinct roots-- they are watered with one water, and We make some of them excel others in fruit; most surely there are signs in this for a people who understand.
And in the Earth are neighbouring tracts, vineyards and ploughed lands, and date-palms, like and unlike, which are watered with one water. And we have made some of them to excel others in fruit. Lo! herein verily are portents for people who have sense.

And in the earth are neighboring tracts,

Meaning, next to each other, some of them are fertile and produce what benefits people, while others are dead, salty and do not produce anything.

This meaning was collected from Ibn Abbas, Mujahid, Sa`id bin Jubayr, Ad-Dahhak and several others.

This also covers the various colors and types of diverse areas on the earth; some red, some white, or yellow, or black, some are stony, or flat, or sandy, or thick, or thin, all made to neighbor each other while preserving their own qualities. All this indicates the existence of the Creator Who does what He wills, there is no deity or lord except Him.

and gardens of vines, and green crops (fields), and date palms...

growing into two or three from a single stem, such as figs, pomegranate and dates.

having one stem for every tree, as is the case with most plants.

From this meaning, the paternal uncle is called one's `Sinw' of his father.

There is an authentic Hadith that states that the Messenger of Allah said to Umar bin Al-Khattab,

Do you not know that man's paternal uncle is the Sinw of his father!

watered with the same water; yet some of them We make more excellent than others to eat.

Abu Hurayrah narrated that the Prophet commented on Allah's statement, وَنُفَضِّلُ بَعْضَهَا عَلَى بَعْضٍ فِي الأُكُلِ (yet some of them We make more excellent than others to eat),

The Dagal, the Persian, the sweet, the bitter...''

Therefore, there are differences between plants and fruits with regards to shape, color, taste, scent, blossoms and the shape of their leaves. There are plants that are very sweet or sour, bitter or mild, fresh; some plants have a combination of these attributes, and the taste then changes and becomes another taste, by Allah's will. There is also some that are yellow in color, or red, or white, or black, or blue, and the same can be said about their flowers; and all these variances and complex diversities are watered by the same water.

Surely, in this there are signs for those who have sound reasoning, and surely, all this indicates the existence of the Creator Who does what He wills and Whose power made distinctions between various things and created them as He wills. So Allah said,

Verily, in these things there are Ayat for the people who understand.