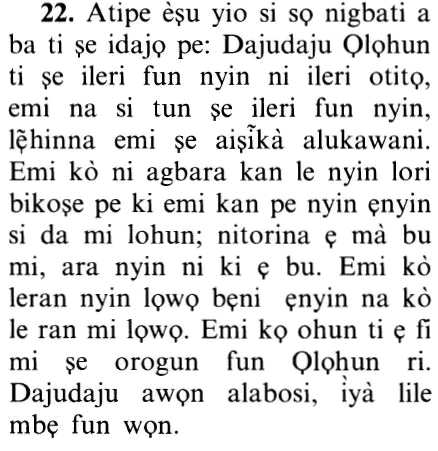 And Satan will say when the matter is decided: "It was Allah Who gave you a promise of Truth: I too promised, but I failed in my promise to you. I had no authority over you except to call you but ye listened to me: then reproach not me, but reproach your own souls. I cannot listen to your cries, nor can ye listen to mine. I reject your former act in associating me with Allah. For wrong-doers there must be a grievous penalty."
And the Shaitan shall say after the affair is decided: Surely Allah promised you the promise of truth, and I gave you promises, then failed to keep them to you, and I had no authority over you, except that I called you and you obeyed me, therefore do not blame me but blame yourselves: I cannot be your aider (now) nor can you be my aiders; surely I disbelieved in your associating me with Allah before; surely it is the unjust that shall have the painful punishment.
And Satan saith, when the matter hath been decided: Lo! Allah promised you a promise of truth; and I promised you, then failed you. And I had no power over you save that I called unto you and ye obeyed me. So blame not, but blame yourselves. I cannot help you, nor can ye help me, Lo! I disbelieved in that which ye before ascribed to me. Lo! for wrong-doers is a painful doom.

Shaytan disowns His Followers on the Day of Resurrection

And Shaytan will say when the matter has been decided:

Allah narrates to us what Iblis will say to his followers after Allah finishes with the judgement between His servants, sending the believers to the gardens of Paradise and the disbelievers to the lows (of the Fire).

Iblis, may Allah curse him, will stand and address the latter, in order to add depression to their depression, sorrow to their sorrow and grief to their grief.

`Verily, Allah promised you a promise of truth.

by the words of His Messengers that if you follow them, you will gain safety and deliverance. Truly, Allah's promise was true and correct news, while I promised you then betrayed you.'

And I too promised you, but I betrayed you.

He (Shaytan) makes promises to them, and arouses in them false desires; and Shaytan's promises are nothing but deceptions. (4:120)

I had no authority over you,

Shaytan will say, `I had no proof for what I called you to, nor evidence for what I promised you,

except that I called you, and you responded to me.

even though the Messengers establish the proof and unequivocal evidences against you and affirmed the truth of what they were sent to you with. But you disobeyed the Messengers and ended up earning this fate,

because it is your fault for defying the proofs and following me in the falsehood that I called you to.'

Shaytan will say next,

I cannot help you,

I cannot benefit, save, or deliver you from what you are suffering,

nor can you help me.

nor can you save me and deliver me from the torment and punishment I am suffering,

I deny your former act of associating me (Shaytan) as a partner with Allah.

or because you associated me with Allah before,' according to Qatadah.

"I deny being a partner with Allah, the Exalted and Most Honored.''

This opinion is the most plausible, for Allah said in other Ayat,

And who is more astray than one who calls on others besides Allah, such as will not answer him till the Day of Resurrection, and who are (even) unaware of their calls to them!

And when mankind are gathered, they will become their enemies and will deny their worshipping. (46:5-6)

Nay, but they (the so-called gods) will deny their worship of them, and become opponents to them. (19:82)

Verily, there is a painful torment for the wrongdoers.''

who deviate from truth and follow falsehood, will earn a painful torment.

It appears that this part of the Ayah narrates the speech that Shaytan will deliver to the people of the Fire after they enter it, as we stated.

"On the Day of Resurrection, two speakers will address the people. Allah the Exalted will say to `Isa, son of Maryam,

Shaytan, may Allah curse him, will stand and address the people,

I had no authority over you except that I called you, and you responded to me.