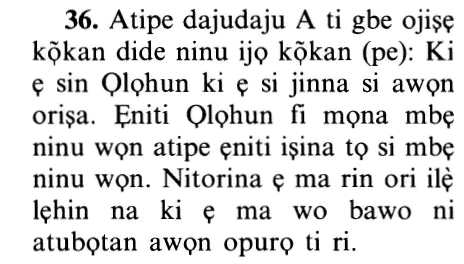 For We assuredly sent amongst every People a messenger, (with the Command), "Serve Allah, and eschew Evil": of the People were some whom Allah guided, and some on whom error became inevitably (established). So travel through the earth, and see what was the end of those who denied (the Truth).
And certainly We raised in every nation a messenger saying: Serve Allah and shun the Shaitan. So there were some of them whom Allah guided and there were others against whom error was due; therefore travel in the land, then see what was the end of the rejecters.
And verily We have raised in every nation a messenger, (proclaiming): Serve Allah and shun false gods. Then some of them (there were) whom Allah guided, and some of them (there were) upon whom error had just hold. Do but travel in the land and see the nature of the consequence for the deniers!

And We have indeed sent a Messenger to every Ummah (community, nation) (saying): "Worship Allah (alone), and shun the Taghut (all false deities).''

Allah continued sending Messengers to mankind with this Message, from the first incidence of Shirk that appeared among the Children of Adam, in the people to whom Nuh was sent - the first Messenger sent by Allah to the people of this earth - until He sent the final Messenger, Muhammad, whose call was addressed to both men and Jinn, in the east and in the west. All of the Messengers brought the same Message, as Allah says:

And We did not send any Messenger before you (O Muhammad) but We revealed to him (saying): None has the right to be worshipped but I (Allah), so worship Me (alone and none else).'' (21:25)

And ask (O Muhammad) those Messengers of Ours whom We sent before you: "Did We ever appointed to be worshipped besides the Most Gracious (Allah)'' (43:45)

And in this Ayah, Allah says:

And We have indeed sent a Messenger to every Ummah (community, nation) (saying): "Worship Allah (alone), and shun the Taghut (all false deities).''

So how could any of the idolators say, لَوْ شَاء اللّهُ مَا عَبَدْنَا مِن دُونِهِ مِن شَيْءٍ (If Allah had so willed, we would not have worshipped any but Him),

The legislative will of Allah is clear and cannot be taken as an excuse by them, because He had forbidden them to do that upon the tongue of His Messengers, but by His universal will (i.e., by which He allows things to occur even though they do not please Him). He allowed them to do that as it was decreed for them. So there is no argument in that for them. Allah created Hell and its people both the Shayatin (devils) and disbelievers, but He does not like His servants to disbelieve. And this point constitutes the strongest proof and the most unquestionable wisdom.

Then Allah informs us that He rebuked them with punishment in this world, after the Messengers issued their warning, thus He says:

This means: ask about what happened to those who went against the Messengers and rejected the truth, see how:

Allah destroyed them completely, and a similar (end awaits) the disbelievers. (47:10)

And indeed those before them belied (the Messengers of Allah), so then how terrible was My denial (punishment). (67:18)

Then Allah told His Messenger