PRAISE, PROVISION, SPENDING IN THE WAY OF ALLAH 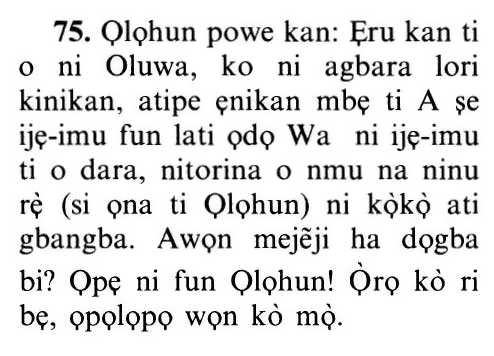 Allah sets forth the Parable (of two men: one) a slave under the dominion of another; He has no power of any sort; and (the other) a man on whom We have bestowed goodly favours from Ourselves, and he spends thereof (freely), privately and publicly: are the two equal? (By no means;) praise be to Allah. But most of them understand not.
Allah sets forth a parable: (consider) a slave, the property of another, (who) has no power over anything, and one whom We have granted from Ourselves a goodly sustenance so he spends from it secretly and openly; are the two alike? (All) praise is due to Allah! Nay, most of them do not know.
Allah coineth a similitude: (on the one hand) a (mere) chattel slave, who hath control of nothing, and (on the other hand) one on whom we have bestowed a fair provision from Us, and he spendeth thereof secretly and openly. Are they equal? Praise be to Allah! But most of them know not.

The Example of the Believer and the Disbeliever, or the Idol and the True God

16:75 Allah gives the example of a servant under the possession of another, he has no power of any sort, and a man on whom We have bestowed good provisions from Us, and he spends from that secretly and openly. Can they be equal (By no means).

"This is the example which Allah gives of the disbeliever and the believer.''

This was also the view of Qatadah and Ibn Jarir.

The servant who has no power over anything is like the disbeliever, and the one who is given good provisions and spends of them secretly and openly is like the believer.

"This is an example given of the idol and the True God - can they be the same!'' Once the difference between them is so clear and so obvious, no one can be unaware of it except the one who is foolish.

All the praises and thanks are to Allah.