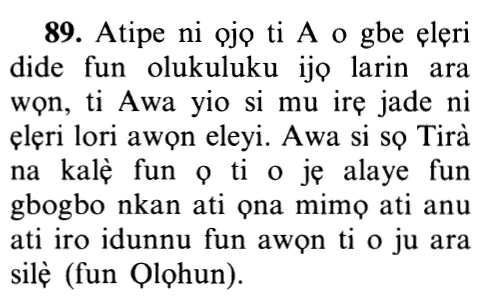 And on the Day when We resurrect a witness from each nation from among themselves, and We bring you (O Muhammad) as a witness against these),

The Ayah means: remember that Day and its terrors, and the great honor and high position that Allah has bestowed upon you.

This is like the Ayah with which Abdullah bin Mas`ud ended when he recited to the Messenger of Allah from the beginning of Surah An-Nisa'. When he reached the Ayah:

How (will it be) then, when We bring from each nation a witness and We bring you (O Muhammad) as a witness against these! (4:41)

the Messenger of Allah said to him:

"I turned to him and saw his eyes streaming with tears.''

The Qur'an explains Everything

(And We revealed the Book (the Qur'an) to you as an explanation of everything,) Ibn Mas`ud said: "﴿Allah﴾ made it clear that in this Qur'an there is complete knowledge and about everything.'' The Qur'an contains all kinds of beneficial knowledge, such as reports of what happened in the past, information about what is yet to come, what is lawful and unlawful, and what people need to know about their worldly affairs, their religion, their livelihood in this world, and their destiny in the Hereafter.

means, for their hearts.

a mercy, and good news for the Muslims.

Al-Awza`i said: وَنَزَّلْنَا عَلَيْكَ الْكِتَابَ تِبْيَانًا لِّكُلِّ شَيْءٍ (And We have revealed the Book (the Qur'an) as an explanation of everything),

meaning, with the Sunnah. The is the reason why the phrase, وَنَزَّلْنَا عَلَيْكَ الْكِتَابَ (And We have revealed the Book to you), is mentioned immediately after the phrase,

And We shall bring you (O Muhammad) as a witness against these.

the meaning - and Allah knows best - is that the One Who obligated you to convey the Book which He revealed to you, will also ask you about that on the Day of Resurrection.

On the Day when Allah gathers the Messengers together and says to them: "What was the response you received (to your Message)!''

Verily, He Who obligated the Qur'an upon you (O Muhammad) will surely bring you back to the return. (28:85)

meaning, the One Who gave you the obligation of conveying the Qur'an will bring you back to Him, and your return will be on the Day of Resurrection, and He will question you about you commission of the duty He gave you.

This is one of the opinions, and it presents a good understanding of it.