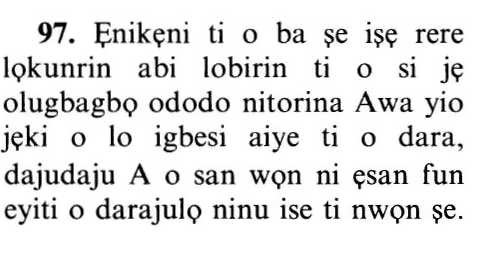 Whoever works righteousness, man or woman, and has Faith, verily, to him will We give a new Life, a life that is good and pure and We will bestow on such their reward according to the best of their actions.
Whoever does good whether male or female and he is a believer, We will most certainly make him live a happy life, and We will most certainly give them their reward for the best of what they did.
Whosoever doeth right, whether male or female, and is a believer, him verily we shall quicken with good life, and We shall pay them a recompense in proportion to the best of what they used to do.

Righteous Deeds and their Reward

Whoever does righteous deeds - whether male or female - while he (or she) is a believer; then We will certainly give them a good life, and We will certainly grant them their rewards in proportion to the best of what they used to do.

This is a promise from Allah to those Children of Adam, male or female, who do righteous deeds - deeds in accordance with the Book of Allah and the Sunnah of His Prophet, with a heart that believes in Allah and His Messenger, while believing that these deeds are commanded and enjoined by Allah.

Allah promises that He will give them a good life in this world and that He will reward them according to the best of their deeds in the Hereafter.

The good life includes feeling tranquility in all aspects of life.

It has been reported that;

Ibn Abbas and a group (of scholars) interpreted it to mean good, lawful provisions.

It was reported that Ali bin Abi Talib interpreted as;

This was also the opinion of Ibn Abbas, Ikrimah and Wahb bin Munabbih.

"None gets (this) good life (mentioned) except in Paradise.''

"It means lawful provisions and worship in this life.''

"It means working to obey Allah and finding joy in that.''

The correct view is that a good life includes all of these things. as found in the Hadith recorded by Imam Ahmad from Abdullah bin `Amr that the Messenger of Allah said:

He who submits (becomes a Muslim) has succeeded, is given sufficient provisions, and is content with Allah for what he is given.

It was also recorded by Muslim.