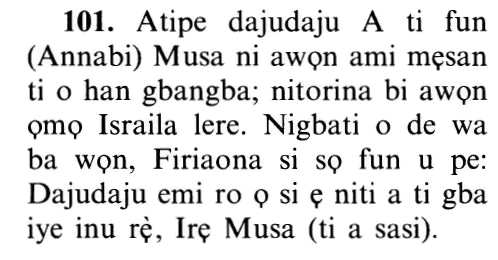 The Nine Signs of Musa

And indeed We gave Musa nine clear signs. Ask then the Children of Israel, when he came to them, then Fir`awn said to him:

Allah tells us that He sent Musa with nine clear signs, which provided definitive proof that his Prophethood was real and that what he was conveying from the One Who had sent him to Fir`awn was true. These clear signs were:

the years of famine,

This was the view of Ibn Abbas.

the five signs mentioned in Suarah Al-A`raf, and

destruction of wealth and the rock.''

the years of famine,

the failure of the crops,

Yet they remained arrogant, and they were of those people who were criminals, (7:133)

meaning, despite all these signs and their witnessing of them, they disbelieved them and belied them wrongfully and arrogantly, although they were themselves were convinced of them, so they did not have any effect on them.

By the same token, (Allah tells His Messenger here), `if We were to respond to what these people are asking you for, who have said that they will not believe in you until you cause springs to gush forth throughout the land for them, they would not respond or believe except if Allah willed.'

As Fir`awn said to Musa, even though he had witnessed the signs which he brought,

"O Musa! I think you are indeed bewitched.''

It was said that this meant he thought he was a sorcerer, but Allah knows best. These nine signs which were mentioned by the Imams (scholars) quoted above are what is referred to here, and in the Ayah:

"And throw down your stick!'' But when he saw it moving as if it were a snake, he turned in flight, and did not look back.

among the nine signs (you will take) to Fir`awn and his people. Verily, they are a people who are rebellious. (27:10-12)

These Ayat include mention of the stick and the hand, and the rest of the nine signs are mentioned in detail in Surah Al-A`raf.

Musa was also given many other signs, such as striking the rock with his staff and water flowing from it, their being shaded with clouds, manna and quails, and other signs which were bestowed upon the Children of Israel after they had left the land of Egypt. But here Allah mentions the nine signs which were witnessed by his people in Egypt. These became evidence against them, because they stubbornly rejected them out of disbelief.