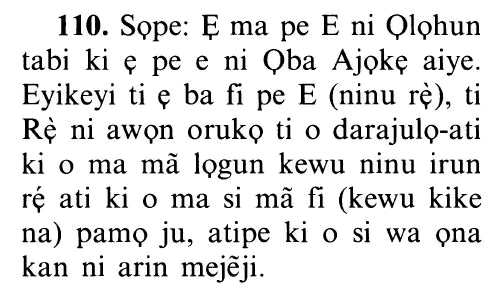 Say: "Call upon Allah, or call upon Rahman: by whatever name ye call upon Him, (it is well): for to Him belong the Most Beautiful Names. Neither speak thy Prayer aloud, nor speak it in a low tone, but seek a middle course between."
Say: Call upon Allah or call upon, the Beneficent Allah; whichever you call upon, He has the best names; and do not utter your prayer with a very raised voice nor be silent with regard to it, and seek a way between these.
Say (unto mankind): Cry unto Allah, or cry unto the Beneficent, unto whichsoever ye cry (it is the same). His are the most beautiful names. And thou (Muhammad), be not loud-voiced in thy worship nor yet silent therein, but follow a way between.

To Allah belong the Most Beautiful Names

O Muhammad, to these idolators who deny that Allah possesses the attribute of mercy and refuse to call Him Ar-Rahman,

"Invoke Allah or invoke Ar-Rahman (the Most Gracious), by whatever name you invoke Him (it is the same), for to Him belong the Best Names.

He is Allah, beside Whom none has the right to be worshipped but He the All-Knower of the unseen and the seen. He is the Most Gracious, the Most Merciful. (59:22) Until His saying;

To Him belong the Best Names. All that is in the heavens and the earth glorify Him. (59:24)

one of the idolators heard the Prophet saying when he was prostrating: "O Most Gracious, O Most Merciful.''

The idolator said, he claims to pray to One, but he is praying to two!

Then Allah revealed this Ayah.

This was also narrated from Ibn Abbas, and by Ibn Jarir.

The Command to recite neither loudly nor softly

And offer your Salah neither aloud,

"This Ayah was revealed when the Messenger of Allah was preaching underground in Makkah.''

And offer your Salah neither aloud nor in a low voice,

"When he prayed with his Companions, he would recite Qur'an loudly, and when the idolators heard that, they insulted the Qur'an, and the One Who had revealed it and the one who had brought it. So Allah said to His Prophet: وَلاَ تَجْهَرْ بِصَلاَتِكَ (And offer your Salah (prayer) neither aloud), means, do not recite it aloud, lest the idolators hear you and insult the Qur'an, وَلاَ تُخَافِتْ بِهَا (nor in a low voice), means, nor recite it so quietly that your companions cannot hear the Qur'an and learn it from you.

This was also reported in the Two Sahihs.

Ad-Dahhak also narrated something similar from Ibn Abbas, and added:

"When he migrated to Al-Madinah, this no longer applied, and he recited as he wished.''

"When the Messenger of Allah recited Qur'an quietly while he was praying, the (idolators) would disperse and refuse to listen to him; if one of them wanted to hear some of what he was reciting in his prayer, he would try to listen without anyone seeing him, because he was afraid of them. If he realized that anybody knew he was listening, he would go away lest they harm him, so he would stop listening. If the Prophet lowered his voice, those who wanted to listen to his recitation could not hear anything, so Allah revealed, وَلاَ تَجْهَرْ بِصَلاَتِكَ (And offer your Salah neither aloud) meaning, do not recite aloud, lest those who want to listen disperse for fear of attracting unwelcome attention, وَلاَ تُخَافِتْ بِهَا (nor in a low voice), but do not make your voice so soft that the one who is trying to listen without being seen cannot hear anything at all. Perhaps he will pay attention to some of what he hears and benefit from it. وَابْتَغِ بَيْنَ ذَلِكَ سَبِيلاً (but follow a way between).''

This was the view of Ikrimah, Al-Hasan Al-Basri and Qatadah that;

this Ayah was revealed concerning recitation in prayer.

It was narrated from Ibn Mas`ud:

"Do not make it so soft that no one can hear it except yourself.''