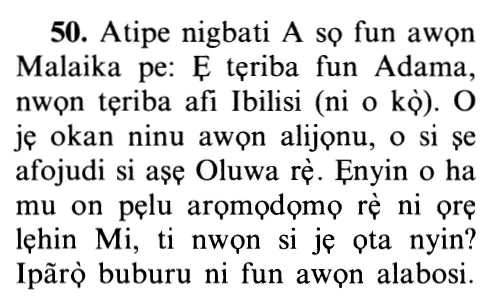 Behold! We said to the angels, "Bow down to Adam": They bowed down except Iblis. He was one of the Jinns, and he broke the Command of his Lord. Will ye then take him and his progeny as protectors rather than Me? And they are enemies to you! Evil would be the exchange for the wrong-doers!
And when We said to the angels: Make obeisance to Adam; they made obeisance but Iblis (did it not). He was of the jinn, so he transgressed the commandment of his Lord. What! would you then take him and his offspring for friends rather than Me, and they are your enemies? Evil is (this) change for the unjust.
And (remember) when We said unto the angels: Fall prostrate before Adam, and they fell prostrate, all save Iblis. He was of the jinn, so he rebelled against his Lord's command. Will ye choose him and his seed for your protecting friends instead of Me, when they are an enemy unto you? Calamitous is the exchange for evil-doers.

The Story of Adam and Iblis

Allah points out to the Children of Adam the enmity of Iblis towards them and their father before them, and rebukes those who follow him and go against their Creator and Master. It is He who created them from nothing and sustains and nourishes them by His kindness, yet they still took Iblis as their friend and declared their enmity towards Allah.

And (remember) when We said to the angels,

meaning all the angels, as was mentioned in the beginning of Surah Al-Baqarah.

Prostrate yourselves unto Adam,

a prostration of respect and honor, as Allah says:

And (remember) when your Lord said to the angels, "I am going to create a human (Adam) from dried (sounding) clay of altered mud. So, when I have fashioned him completely and breathed into him the soul which I created for him, then fall (you) down prostrating yourselves unto him. (15:28-29)

So they prostrated themselves except Iblis. He was one of the Jinn;

The angels were created from light,

Iblis was created from smokeless fire, and

Adam was created from that which has been described to you.

When matters are crucial, every vessel leaks that which it contains and is betrayed by its true nature. Iblis used to do what the angels did and resembled them in their devotion and worship, so he was included when they were addressed, but he disobeyed and went against what he was told to do. So Allah points out here that he was one of the Jinn, i.e., he was created from fire, as He says elsewhere:

This was narrated by Ibn Jarir with a Sahih chain.

he disobeyed the command of his Lord.

meaning by stepping beyond the bounds of obedience to Allah.

Fisq (disobeying) implies going out or stepping beyond. When the date emerges from its flower, the verb used in Arabic is Fasaqat; the same verb is used to describe a mouse coming out of its hole when it comes out to do damage.

Then Allah says, rebuking those who follow and obey Iblis:

Will you then take him and his offspring as protectors and helpers rather than Me!

meaning, instead of Me.

while they are enemies to you,

This is why Allah says:

What an evil is the exchange for the wrongdoers.

This is like the Ayah in Surah Ya Sin where, after mentioning the Resurrection and its terrors, and the ultimate end of the blessed and the doomed, Allah then says:

(It will be said): "And O you the criminals! Get you apart this Day (from the believers). until; أَفَلَمْ تَكُونُوا تَعْقِلُونَ (Did you not then understand). (36:59-62)