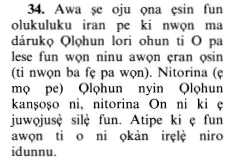 And for every nation We have appointed religious ceremonies,

Allah tells us that sacrifice and shedding blood in the Name of Allah has been prescribed for all nations.

And for every nation We have appointed religious ceremonies,

"This means Makkah; Allah did not appoint religious ceremonies anywhere else for any nation.''

that they may mention the Name of Allah over the beast of cattle that He has given them for food.

It was recorded in the Two Sahihs that Anas said,

"The Messenger of Allah brought two fat, horned rams; he said Bismillah and Allahu Akbar, then he put his foot on their necks."

And your God is One God, so you must submit to Him Alone.

Your God is One, even though the Laws of the Prophets may vary and may abrogate one another. All of the Prophets called mankind to worship Allah Alone with no partner or associate.

And We did not send any Messenger before you but We revealed to him (saying): None has the right to be worshipped but I, so worship Me. (21:25)

Allah says: فَلَهُ أَسْلِمُوا (so you must submit to Him Alone),

meaning, submit to His commands and obey Him in all sincerity.

And give glad tidings to the Mukhbitin.

"Those who find contentment in their faith.''

"Those who find contentment in their faith and who accept the decree of Allah and submit to Him.''

It is better to interpret it by what comes next, which is: