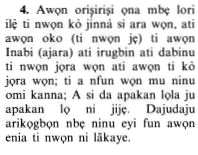 About the (Evil One) it is decreed that whoever turns to him for friendship, him will he lead astray, and he will guide him to the Penalty of the Fire.
Against him it is written down that whoever takes him for a friend, he shall lead him astray and conduct him to the chastisement of the burning fire.
For him it is decreed that whoso taketh him for friend, he verily will mislead him and will guide him to the punishment of the Flame.

and follows every rebellious Shaytan. For him it is decreed,

"This refers to that Shaytan.''

meaning that is a matter written in the decree.

that whosoever follows him, (and imitates him),

he will mislead him, and will drive him to the torment of the Fire.

means, he will mislead him in this world, and in the Hereafter he will drive him to the torment of the Fire, which is unbearably hot, painful and agonizing.

"This Ayah was revealed about An-Nadr bin Al-Harith."

This was also the view of Ibn Jurayj.