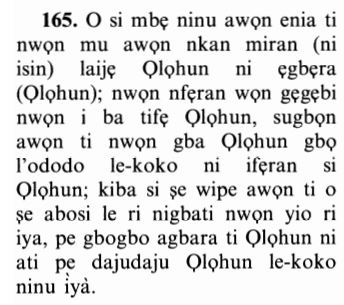 Yet there are men who take (for worship) others besides Allah, as equal (with Allah): They love them as they should love Allah. But those of Faith are overflowing in their love for Allah. If only the unrighteous could see, behold, they would see the penalty: that to Allah belongs all power, and Allah will strongly enforce the penalty.
And there are some among men who take for themselves objects of worship besides Allah, whom they love as they love Allah, and those who believe are stronger in love for Allah and O, that those who are unjust had seen, when they see the chastisement, that the power is wholly Allah's and that Allah is severe in requiting (evil).
Yet of mankind are some who take unto themselves (objects of worship which they set as) rivals to Allah, loving them with a love like (that which is the due) of Allah (only) - those who believe are stauncher in their love for Allah - Oh, that those who do evil had but known, (on the day) when they behold the doom, that power belongeth wholly to Allah, and that Allah is severe in punishment!

The Condition of the Polytheists in this Life and the Hereafter
In these Ayat, Allah mentions the condition of the polytheists in this life and their destination in the Hereafter.
Allah says;
وَمِنَ النَّاسِ مَن يَتَّخِذُ مِن دُونِ اللّهِ أَندَاداً يُحِبُّونَهُمْ كَحُبِّ اللّهِ ...
And of mankind are some who take (for worship) others besides Allah as rivals (to Allah). They love them as they love Allah. They appointed equals and rivals with Allah, worshipping them along with Allah and loving them, just as they love Allah. However, Allah is the only deity worthy of worship, Who has neither rival nor opponent nor partner.
It is reported in the Sahihayn that Abdullah bin Mas`ud said:
I said, "O Messenger of Allah! What is the greatest sin'' He said:
أَنْ تَجْعَلَ للهِ نِدًّا وَهُوَ خَلَقَك
To appoint a rival to Allah while He Alone has created you.
Allah said:
... وَالَّذِينَ آمَنُواْ أَشَدُّ حُبًّا لِّلّهِ ...
But those who believe, love Allah more (than anything else).
Because these believers love Allah, know His greatness, revere Him, believe in His Oneness, then they do not associate anything or anyone with Him in the worship. Rather, they worship Him Alone, depend on Him and they seek help from Him for each and every need.
Then, Allah warns those who commit Shirk,
... وَلَوْ يَرَى الَّذِينَ ظَلَمُواْ إِذْ يَرَوْنَ الْعَذَابَ أَنَّ الْقُوَّةَ لِلّهِ جَمِيعاً ...
If only, those who do wrong could see, when they will see the torment, that all power belongs to Allah.
if these people knew what they will face and the terrible punishment they are to suffer because of their disbelief and Shirk (polytheism), then they would shun the deviation that they live by.
... وَأَنَّ اللّهَ شَدِيدُ الْعَذَابِ ﴿١٦٥﴾
and that Allah is severe in punishment.