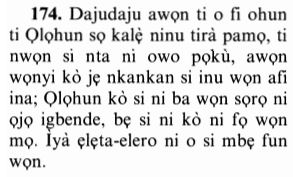 (Lo! those who hide aught of the Scripture which Allah hath revealedﾅ) [2:174]. Reporting from Abu Salih who reported it from Ibn Abbas, al-Kalbi said: ﾓThis was revealed about the leaders and doctors of the Jews. They used to get gifts and surpluses from ordinary Jews and hoped that the new prophet will be sent from amongst them. When he was sent from amongst others, they feared the loss of their gains and the waning of their leadership.
As a result, they changed the traits of Muhammad, Allah bless him and give him peace, [as found in the Torah] and then said to people: These are the traits of the prophet who will be sent at the end of time. Look! He does not resemble the prophet who is in Mecca. When ordinary people looked at the changed traits, they found them different than those of Muhammad, and so they did not believe in himﾔ.

Criticizing the Jews for concealing what Allah revealed
Allah said:
إِنَّ الَّذِينَ يَكْتُمُونَ مَا أَنزَلَ اللّهُ مِنَ الْكِتَابِ ...
Verily, those who conceal what Allah has sent down of the Book,
Meaning the Jews who concealed their Book's descriptions of Muhammad, all of which testify to his truth as a Messenger and a Prophet.
They concealed this information so that they would not lose authority and the position that they had with the Arabs, where they would bring them gifts, and honor them. The cursed Jews feared that if they announced what they know about Muhammad, then the people would abandon them and follow him. So they hid the truth so that they may retain the little that they were getting, and they sold their souls for this little profit.
They preferred the little that they gained over guidance and following the truth, believing in the Messenger and having faith in what Allah was sent him with. Therefore, they have profited failure and loss in this life and the Hereafter.
As for this world, Allah made the truth about His Messenger known anyway, by the clear signs and the unequivocal proofs. Thereafter, those whom the Jews feared would follow the Prophet, believed in him and followed him anyway, and so they became his supporters against them. Thus, the Jews earned anger on top of the wrath that they already had earned before, and Allah criticized them again many times in His Book.
For instance, Allah said in this Ayah,
إِنَّ الَّذِينَ يَكْتُمُونَ مَا أَنزَلَ اللّهُ مِنَ الْكِتَابِ وَيَشْتَرُونَ بِهِ ثَمَنًا قَلِيلاً ...
Verily, those who conceal what Allah has sent down of the Book, and purchase a small gain therewith (of worldly things).
meaning, the joys and delights of this earthly life.
Allah said:
... أُولَـئِكَ مَا يَأْكُلُونَ فِي بُطُونِهِمْ إِلاَّ النَّارَ ...
...they eat into their bellies nothing but fire, meaning, whatever they eat in return for hiding the truth, will turn into a raging fire in their stomachs on the Day of Resurrection.
Similarly, Allah said:
إِنَّ الَّذِينَ يَأْكُلُونَ أَمْوَلَ الْيَتَـمَى ظُلْماً إِنَّمَا يَأْكُلُونَ فِى بُطُونِهِمْ نَاراً وَسَيَصْلَوْنَ سَعِيراً
Verily, those who unjustly eat up the property of orphans, they eat up only fire into their bellies, and they will be burnt in the blazing Fire! (4:10)
Also, reported in an authentic Hadith is that Allah's Messenger said:
الَّذِي يَأْكُلُ أَوْ يَشْرَبُ فِي آنِيةِ الذَّهَبِ وَالْفِضَّةِ إنَّمَا يُجَرْجِرُ فِي بَطْنِهِ نَارَ جَهَنَّم
Those who eat or drink in golden or silver plates are filling their stomachs with the fire of Jahannam (Hell).
Allah said:
... وَلاَ يُكَلِّمُهُمُ اللّهُ يَوْمَ الْقِيَامَةِ وَلاَ يُزَكِّيهِمْ وَلَهُمْ عَذَابٌ أَلِيمٌ ﴿١٧٤﴾
Allah will not speak to them on the Day of Resurrection, nor purify them, and theirs will be a painful torment.
This is because Allah is furious with them for concealing the truth. They thus deserve Allah's anger, so Allah will not look at them or purify them, meaning that He will not praise them but will cause them to taste a severe torment.
Then, Allah said about them: