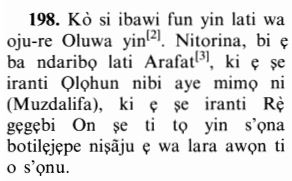 It is no crime in you if ye seek of the bounty of your Lord (during pilgrimage). Then when ye pour down from (Mount) Arafat, celebrate the praises of Allah at the Sacred Monument, and celebrate His praises as He has directed you, even though, before this, ye went astray.
There is no blame on you in seeking bounty from your Lord, so when you hasten on from &quot;Arafat&quot;, then remember Allah near the Holy Monument, and remember Him as He has guided you, though before that you were certainly of the erring ones.
It is no sin for you that ye seek the bounty of your Lord (by trading). But, when ye press on in the multitude from 'Arafat, remember Allah by the sacred monument. Remember Him as He hath guided you, although before ye were of those astray.