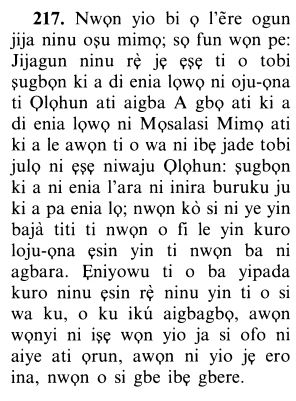 They ask thee concerning fighting in the Prohibited Month. Say: "Fighting therein is a grave (offence); but graver is it in the sight of Allah to prevent access to the path of Allah, to deny Him, to prevent access to the Sacred Mosque, and drive out its members." Tumult and oppression are worse than slaughter. Nor will they cease fighting you until they turn you back from your faith if they can. And if any of you Turn back from their faith and die in unbelief, their works will bear no fruit in this life and in the Hereafter; they will be companions of the Fire and will abide therein.
They ask you concerning the sacred month about fighting in it. Say: Fighting in it is a grave matter, and hindering (men) from Allah's way and denying Him, and (hindering men from) the Sacred Mosque and turning its people out of it, are still graver with Allah, and persecution is graver than slaughter; and they will not cease fighting with you until they turn you back from your religion, if they can; and whoever of you turns back from his religion, then he dies while an unbeliever-- these it is whose works shall go for nothing in this world and the hereafter, and they are the inmates of the fire; therein they shall abide.
They question thee (O Muhammad) with regard to warfare in the sacred month. Say: Warfare therein is a great (transgression), but to turn (men) from the way of Allah, and to disbelieve in Him and in the Inviolable Place of Worship, and to expel His people thence, is a greater with Allah; for persecution is worse than killing. And they will not cease from fighting against you till they have made you renegades from your religion, if they can. And whoso becometh a renegade and dieth in his disbelief: such are they whose works have fallen both in the world and the Hereafter. Such are rightful owners of the Fire: they will abide therein.