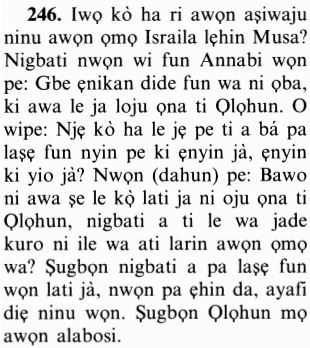 The Story of the Jews Who sought a King to be appointed over Them
Allah tells;
أَلَمْ تَرَ إِلَى الْمَلإِ مِن بَنِي إِسْرَائِيلَ مِن بَعْدِ مُوسَى إِذْ قَالُواْ لِنَبِيٍّ لَّهُمُ ابْعَثْ لَنَا مَلِكًا نُّقَاتِلْ فِي سَبِيلِ اللّهِ قَالَ هَلْ عَسَيْتُمْ إِن كُتِبَ عَلَيْكُمُ الْقِتَالُ أَلاَّ تُقَاتِلُواْ ...
Have you not thought about the group of the Children of Israel after (the time of) Musa! When they said to a Prophet of theirs, "Appoint for us a king and we will fight in Allah's way.''
He said, "Would you then refrain from fighting, if fighting was prescribed for you!''
Mujahid said that; the Prophet (mentioned in the Ayah) is Shamwil (Samuel).
Wahb bin Munabbih said: The Children of Israel remained on the straight path for a period of time after Moses. They then innovated in the religion and some of them even worshipped the idols. Yet, there were always Prophets sent among them who would command them to work righteous deeds, refrain from doing evil and who would rule them according to the commands of the Torah.
When they (Israelites) committed the evil that they committed, Allah caused their enemies to overwhelm them, and many fatalities fell among them as a consequence. Their enemies also captured a great number of them, and took over large areas of their land.
Earlier, anyone who would fight the Israelites would lose, because they had the Torah and the Tabut, which they inherited generation after generation ever since the time of Moses, who spoke to Allah directly. Yet, the Israelites kept indulging in misguidance until some king took the Tabut from them during a battle. That king also took possession of the Torah, and only a few of the Israelites who memorized it remained.
The Prophethood halted among their various tribes and only a pregnant woman remained of the offspring of Lavi (Levi), in whom the Prophethood still appeared. Her husband had been killed, so the Israelites kept her in a house so that Allah may give her a boy, who would be their Prophet. The woman also kept invoking Allah to grant her a boy. Allah heard her pleas and gave her a boy whom she called `Shamwil' meaning `Allah has heard my pleas.'
Some people said that the boy's name was Shamun (Simeon), which also has a similar meaning.
As that boy grew, Allah raised him to be a righteous person. When he reached the age of Prophethood, Allah revealed to him and commanded him to call (his people) to Him and to His Tawhid (Oneness). Shamwil called the Children of Israel (to Allah) and they asked him to appoint a king over them so that they could fight their enemies under his command. The kingship had also ended among them.
Their Prophet said to them, "What if Allah appoints a king over you, would you fulfill your vow to fight under his command!''
... قَالُواْ وَمَا لَنَا أَلاَّ نُقَاتِلَ فِي سَبِيلِ اللّهِ وَقَدْ أُخْرِجْنَا مِن دِيَارِنَا وَأَبْنَآئِنَا ...
They said, "Why should we not fight in Allah's way while we have been driven out of our homes and our children!''
meaning, `After our land had been confiscated and our children had been taken from us.'
Allah said:
... فَلَمَّا كُتِبَ عَلَيْهِمُ الْقِتَالُ تَوَلَّوْاْ إِلاَّ قَلِيلاً مِّنْهُمْ وَاللّهُ عَلِيمٌ بِالظَّالِمِينَ ﴿٢٤٦﴾
But when fighting was ordered for them, they turned away, all except a few of them. And Allah is All-Aware of the wrongdoers.
meaning, only a few of them kept their promise, but the majority abandoned Jihad and Allah has full knowledge of them.