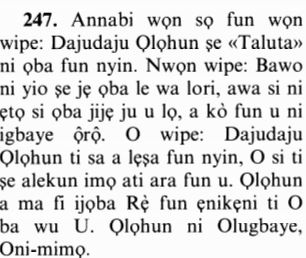 Their Prophet said to them: "Allah hath appointed Talut as king over you." They said: "How can he exercise authority over us when we are better fitted than he to exercise authority, and he is not even gifted, with wealth in abundance?" He said: "Allah hath Chosen him above you, and hath gifted him abundantly with knowledge and bodily prowess: Allah Granteth His authority to whom He pleaseth. Allah careth for all, and He knoweth all things."
And their prophet said to them: Surely Allah has raised Talut to be a king over you. They said: How can he hold kingship over us while we have a greater right to kingship than he, and he has not been granted an abundance of wealth? He said: Surely Allah has chosen him in preference to you, and He has increased him abundantly in knowledge and physique, and Allah grants His kingdom to whom He pleases, and Allah is Amplegiving, Knowing.
Their Prophet said unto them: Lo! Allah hath raised up Saul to be a king for you. They said: How can he have kingdom over us when we are more deserving of the kingdom than he is, since he hath not been given wealth enough? He said: Lo! Allah hath chosen him above you, and hath increased him abundantly in wisdom and stature. Allah bestoweth His Sovereignty on whom He will. Allah is All-Embracing, All-Knowing.

Allah tells;
وَقَالَ لَهُمْ نَبِيُّهُمْ إِنَّ اللّهَ قَدْ بَعَثَ لَكُمْ طَالُوتَ مَلِكًا ...
And their Prophet said to them, "Indeed Allah has appointed Talut (Saul) as a king over you.''
When the Israelites asked their Prophet to appoint a king over them, he appointed Talut (Saul), who was then a soldier. But, Talut was not a descendant of the house of kings among them, which was exclusively in the offspring of Yahudha (Judah). This is why;
... قَالُوَاْ أَنَّى يَكُونُ لَهُ الْمُلْكُ عَلَيْنَا ...
They said, "How can he be a king over us, meaning, how can he be the king for us!
... وَنَحْنُ أَحَقُّ بِالْمُلْكِ مِنْهُ وَلَمْ يُؤْتَ سَعَةً مِّنَ الْمَالِ ...
when we are fitter than him for the kingdom, and he has not been given enough wealth,
They said that Talut was also poor and did not have the wealth that justifies him being king.
Some people stated that Talut used to bring water to the people, while others stated that his profession was dyeing skins.
The Jews, thus, disputed with their Prophet while they were supposed to obey him and to say good words to him.
... قَالَ إِنَّ اللّهَ اصْطَفَاهُ عَلَيْكُمْ ...
He (their Prophet) said: "Verily, Allah has chosen him above you.
meaning, `Allah chose Talut from amongst you while having better knowledge about him.'
Their Prophet stated, "I did not choose Talut to be your king on my own. Rather, Allah has commanded that upon your request.''
Further:
... وَزَادَهُ بَسْطَةً فِي الْعِلْمِ وَالْجِسْمِ ...
...and has increased him abundantly in knowledge and stature.
meaning, `Talut is more knowledgeable and honorable than you, and stronger and more patient during combat, and has more knowledge of warfare.
In short, he has more knowledge and is stronger than you are. The king should have sufficient knowledge, be fair looking and should have a strong soul and body.'
He then said:
... وَاللّهُ يُؤْتِي مُلْكَهُ مَن يَشَاء ...
And Allah grants His kingdom to whom He wills. Meaning, Allah Alone is the Supreme Authority Who does what He wills and no one can ask Him about His actions, while they will be asked (about their actions by Him). This is because Allah has perfect knowledge, wisdom and kindness with His creation.
Allah said:
... وَاللّهُ وَاسِعٌ عَلِيمٌ ﴿٢٤٧﴾
And Allah is All-Sufficient for His creatures' needs, All-Knower. Meaning, His favor is encompassing and He grants His mercy to whom He wills. He also knows those who deserve to be kings and those who do not deserve it.