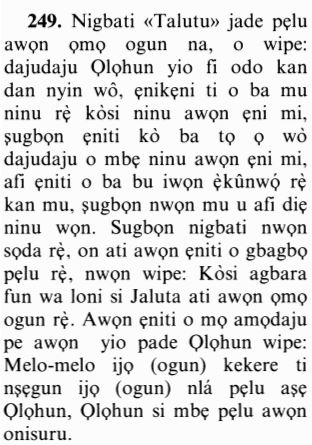 When Talut set forth with the armies, he said: "Allah will test you at the stream: if any drinks of its water, He goes not with my army: Only those who taste not of it go with me: A mere sip out of the hand is excused." but they all drank of it, except a few. When they crossed the river,- He and the faithful ones with him,- they said: "This day We cannot cope with Goliath and his forces." but those who were convinced that they must meet Allah, said: "How oft, by Allah's will, Hath a small force vanquished a big one? Allah is with those who steadfastly persevere."
So when Talut departed with the forces, he said: Surely Allah will try you with a river; whoever then drinks from it, he is not of me, and whoever does not taste of it, he is surely of me, except he who takes with his hand as much of it as fills the hand; but with the exception of a few of them they drank from it. So when he had crossed it, he and those who believed with him, they said: We have today no power against Jalut and his forces. Those who were sure that they would meet their Lord said: How often has a small party vanquished a numerous host by Allah's permission, and Allah is with the patient.
And when Saul set out with the army, he said: Lo! Allah will try you by (the ordeal of) a river. Whosoever therefore drinketh thereof he is not of me, and whosoever tasteth it not he is of me, save him who taketh (thereof) in the hollow of his hand. But they drank thereof, all save a few of them. And after he had crossed (the river), he and those who believed with him, they said: We have no power this day against Goliath and his hosts. But those who knew that they would meet Allah exclaimed: How many a little company hath overcome a mighty host by Allah's leave! Allah is with the steadfast.

Allah tells;
فَلَمَّا فَصَلَ طَالُوتُ بِالْجُنُودِ ...
Then when Talut set out with the army,
Allah states that Talut, the king of the Children of Israel, marched forth with his soldiers and the Israelites who obeyed him. His army was of eighty thousand then, according to As-Suddi, but Allah knows best.
Talut said:
... قَالَ إِنَّ اللّهَ مُبْتَلِيكُم بِنَهَرٍ ...
he said: "Verily, Allah will try you by a river. Meaning, He will test you with a river, which flowed between Jordan and Palestine, i.e., the Shariah river, according to Ibn Abbas and others.
He continued,
...فَمَن شَرِبَ مِنْهُ فَلَيْسَ مِنِّي ...
So whoever drinks thereof, he is not of me; meaning, shall not accompany me today.
... وَمَن لَّمْ يَطْعَمْهُ فَإِنَّهُ مِنِّي إِلاَّ مَنِ اغْتَرَفَ غُرْفَةً بِيَدِهِ ...
and whoever tastes it not, he is of me, except him who takes (thereof) in the hollow of his hand.
meaning, there is no harm in this case.
Allah then said:
... فَشَرِبُواْ مِنْهُ إِلاَّ قَلِيلاً مِّنْهُمْ ...
Yet, they drank thereof, all, except a few of them.
Ibn Jurayj stated that Ibn Abbas commented,
"Whoever took some of it (the river's water) in the hollow of his hand, quenched his thirst; as for those who drank freely from it, their thirst was not quenched.''
Ibn Jarir reported that Al-Bara bin Azib said,
"We used to say that the Companions of Muhammad who accompanied him on the battle of Badr were more than three hundred and ten, just as many as the soldiers who crossed the river with Talut. Only those who believed crossed the river with him.''
Al-Bukhari also reported this.
This is why Allah said:
... فَلَمَّا جَاوَزَهُ هُوَ وَالَّذِينَ آمَنُواْ مَعَهُ قَالُواْ لاَ طَاقَةَ لَنَا الْيَوْمَ بِجَالُوتَ وَجُنودِهِ ...
So when he had crossed it (the river), he and those who believed with him, they said: "We have no power this day against Jalut (Goliath) and his hosts.''
This Ayah indicates that the Israelites (who remained with Saul) thought that they were few in the face of their enemy who were many then. So, their knowledgeable scholars strengthened their resolve by stating that Allah's promise is true and that triumph comes from Allah Alone, not from the large numbers or the adequacy of the supplies.
... قَالَ الَّذِينَ يَظُنُّونَ أَنَّهُم مُّلاَقُو اللّهِ ...
But those who knew with certainty that they were going to meet Allah, said:
... كَم مِّن فِئَةٍ قَلِيلَةٍ غَلَبَتْ فِئَةً كَثِيرَةً بِإِذْنِ اللّهِ وَاللّهُ مَعَ الصَّابِرِينَ ﴿٢٤٩﴾
"How often has a small group overcome a mighty host by Allah's leave'' And Allah is with As-Sabirin (the patient).