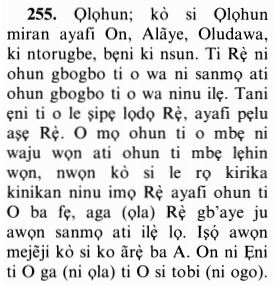 Allah! There is no god but He,-the Living, the Self-subsisting, Eternal. No slumber can seize Him nor sleep. His are all things in the heavens and on earth. Who is there can intercede in His presence except as He permitteth? He knoweth what (appeareth to His creatures as) before or after or behind them. Nor shall they compass aught of His knowledge except as He willeth. His Throne doth extend over the heavens and the earth, and He feeleth no fatigue in guarding and preserving them for He is the Most High, the Supreme (in glory).
Allah is He besides Whom there is no god, the Everliving, the Self-subsisting by Whom all subsist; slumber does not overtake Him nor sleep; whatever is in the heavens and whatever is in the earth is His; who is he that can intercede with Him but by His permission? He knows what is before them and what is behind them, and they cannot comprehend anything out of His knowledge except what He pleases, His knowledge extends over the heavens and the earth, and the preservation of them both tires Him not, and He is the Most High, the Great.
Allah! There is no deity save Him, the Alive, the Eternal. Neither slumber nor sleep overtaketh Him. Unto Him belongeth whatsoever is in the heavens and whatsoever is in the earth. Who is he that intercedeth with Him save by His leave? He knoweth that which is in front of them and that which is behind them, while they encompass nothing of His knowledge save what He will. His throne includeth the heavens and the earth, and He is never weary of preserving them. He is the Sublime, the Tremendous.