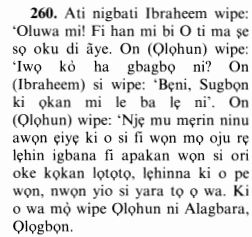 (And when Abraham said (unto his Lord): My Lord! Show me how Thou givest life to the deadﾅ) [2:260].
The commentators of the Qurﾒan have mentioned the reason why Ibrahim asked his Lord to show him how He brings the dead back to life. Said ibn Muhammad ibn Ahmad ibn Jafar informed us> Shubah ibn
Muhammad> Makki ibn Abdan> Abuﾒl-Azhar> Ruh> Said > Qatadah who said: ﾓIt was mentioned to us
that Ibrahim passed by a corpse of a beast which was surrounded by beasts of the sea and of the land, and so he said: O Allah! Show me how you bring the dead back to life!ﾒ ﾔ Also, al-Hasan, Ataﾒ al-Khurasani, al-Dahhak and Ibn Jurayj said: ﾓIbrahim, Allahﾒs intimate friend, passed by a dead donkey lying on seashore (Ataﾒ said this was rather Tiberias lake).
He saw the carrion surrounded by beasts of the water and of the land. When the water rose up, the fish and the beasts of the sea came forward and ate of it, and whatever fell of the carrion was swept away by water; and when the sea ebbed away, wild animals went forward and ate of it, and whatever fell of the carrion became dust. When the wild animals went away, birds came forward and ate of the carrion, and whatever fell from them, the wind scattered it away in the air.
Ibrahim was amazed when he saw this. He said: O Lord! I know very well that you will gather its parts, please show me how you bring it to life, so that I can see it with my own eyesﾒ ﾔ. Said Ibn Zayd: ﾓIbrahim passed by a dead whale, half of which was in the sea and half in the land. The part which was in the sea was eaten up by the beasts of the sea while the part which was in the land was eaten up by the beasts of the land. Satan the evil one whispered to him: How is Allah going to gather the different parts of this from the bellies of all these beasts?ﾒ Ibrahim said: (My Lord! Show me how Thou givest life to the dead, He said: Dost thou not believe? Abraham said: Yea, but (I ask) in order that my heart may be at ease) by dispelling Satanﾒs whisperingﾔ.
Abu Nuaym al-Asfahani informed me, among that which he authorized me to narrate from him> Abd Allah ibn Muhammad ibn Jafar> Muhammad ibn Sahl> Salamah ibn Shabib> Ibrahim ibn al-Hakam ibn Aban> his father who said: ﾓI was sitting with Ikrimah at a seashore when he said: those who drown in the seas, the fish share their meat such that nothing remains of them except bones. These bones are then washed out by the sea. These bones then become transformed and hollow. Camels then pass by them and eat them. Then they become dung. People will then come and use this dung to lit fire.
When the fire is put out, the wind comes and scatters the ashes all over. When the Trumpet is blown, these people and the inhabitants of the graves will emerge together. This is what is meant by Allahﾒs saying (ﾅ and behold them standing waiting!) [al-Zumar, 39:68]ﾒ ﾔ. Said Muhammad ibn Ishaq ibn Yasar: ﾓWhen Ibrahim argued with Nimrod, he said: My Lord is He who gives life and death. Nimrod said: I also give life and deathﾒ. He killed a man and set another free and then said: I have killed this one and given life to this oneﾒ.
Ibrahim said to him: Well, Allah gives life by restoring the spirit to this dead bodyﾒ. Nimrod said: And did
you see that which you now say with your own eyes?ﾒ He could not say: yes, I saw it! And so he moved on to another argument. Then he requested his Lord to show him how He brought the dead back to life so that he may set his heart at ease upon argumentation, such that his argument would be based upon direct seeing and witnessingﾒ ﾔ. Ibn Abbas, Said ibn Jubayr and al-Suddi also said: ﾓWhen Allah took Ibrahim as his intimate friend, the angel of death took permission from his Lord to go and give Ibrahim this glad tiding.
He went to Ibrahim and said: I came to give you the glad tiding that Allah, exalted is He, has taken you as an intimate friendﾒ. Ibrahim praised Allah, glorious and majestic is He, and then said: What is the sign of this intimate friendship?ﾒ The angel said: Its sign is that Allah answers your supplication and brings the dead back to life by your requestﾒ. The angel then left. Ibrahim said: My Lord! Show me how You give life to the deadﾒ. Allah said: Do you not believe?ﾒ Ibrahim said: I do, but I ask in order that my heart may be at ease, knowing that you answer my request when I request You and give me when I ask You, and that you have indeed taken me as an intimate friendﾒ ﾔ.