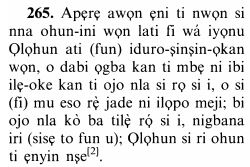 And the likeness of those who spend their substance, seeking to please Allah and to strengthen their souls, is as a garden, high and fertile: heavy rain falls on it but makes it yield a double increase of harvest, and if it receives not Heavy rain, light moisture sufficeth it. Allah seeth well whatever ye do.
And the parable of those who spend their property to seek the pleasure of Allah and for the certainty 'of their souls is as the parable of a garden on an elevated ground, upon which heavy rain falls so it brings forth its fruit twofold but if heavy rain does not fall upon it, then light rain (is sufficient); and Allah sees what you do.
And the likeness of those who spend their wealth in search of Allah's pleasure, and for the strengthening of their souls, is as the likeness of a garden on a height. The rainstorm smiteth it and it bringeth forth its fruit twofold. And if the rainstorm smite it not, then the shower. Allah is Seer of what ye do.

Allah says;
وَمَثَلُ الَّذِينَ يُنفِقُونَ أَمْوَالَهُمُ ابْتِغَاء مَرْضَاتِ اللّهِ وَتَثْبِيتًا مِّنْ أَنفُسِهِمْ ...
And the parable of those who spend their wealth seeking Allah's pleasure while they in their own selves are sure and certain that Allah will reward them (for their spending in His cause),
This is the example of the believers who give away charity seeking only Allah's pleasure, وَتَثْبِيتًا مِّنْ أَنفُسِهِمْ (while they in their own selves are sure and certain) meaning, they are certain that Allah shall reward them for these righteous acts with the best rewards.
Similarly, in a Hadith collected by Al-Bukhari and Muslim, the Messenger of Allah said,
مَنْ صَامَ رَمَضَانَ إِيمَانًا وَاحْتِسَابًا
Whoever fasts Ramadan with faith and expectation...
meaning, believing that Allah commanded the fast, all the while awaiting His reward for fasting it.
Allah's statement,
... كَمَثَلِ جَنَّةٍ بِرَبْوَةٍ ...
is that of a garden on a Rabwah,
means, the example of a garden on `a height above the ground', as the majority of scholars have stated.
Ibn Abbas and Ad-Dahhak added that it also has flowing rivers.
Allah's statement,
... أَصَابَهَا وَابِلٌ ...
Wabil falls on it,
means, heavy rain as we stated, So it produces its,
and it doubles its yield of harvest. And if it does not receive heavy rain, light rain suffices it.
... فَآتَتْ أُكُلَهَا ...
its yield of harvest,
meaning, fruits or produce,
... ضِعْفَيْنِ ...
doubles,
as compared to other gardens.
... فَإِن لَّمْ يُصِبْهَا وَابِلٌ فَطَلٌّ ...
And if it does not receive Wabil, a Tall suffices it.
Ad-Dahhak said that; the `Tall' is light rain.
The Ayah indicates that the garden on the Rabwah is always fertile, for if heavy rain does not fall on it, light rain will suffice for it. Such is the case regarding the believer's good deeds, for they never become barren. Rather, Allah accepts the believer's righteous deeds and increases them, each according to his deeds. This is why Allah said next,
... وَاللّهُ بِمَا تَعْمَلُونَ بَصِيرٌ ﴿٢٦٥﴾
And Allah is All-Seer of what you do.
meaning, none of His servants' deeds ever escapes His perfect watch.