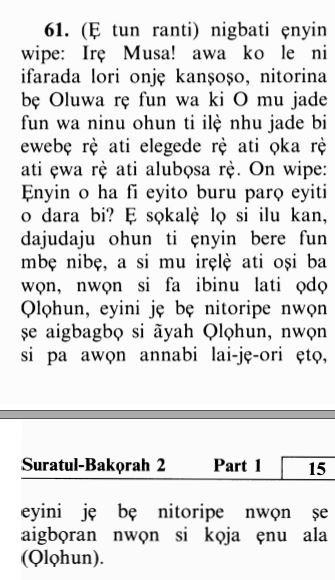 And remember ye said: "O Moses! we cannot endure one kind of food (always); so beseech thy Lord for us to produce for us of what the earth groweth, -its pot-herbs, and cucumbers, Its garlic, lentils, and onions." He said: "Will ye exchange the better for the worse? Go ye down to any town, and ye shall find what ye want!" They were covered with humiliation and misery; they drew on themselves the wrath of Allah. This because they went on rejecting the Signs of Allah and slaying His Messengers without just cause. This because they rebelled and went on transgressing.
And when you said: O Musa! we cannot bear with one food, therefore pray Lord on our behalf to bring forth for us out of what the earth grows, of its herbs and its cucumbers and its garlic and its lentils and its onions. He said: Will you exchange that which is better for that which is worse? Enter a city, so you will have what you ask for. And abasement and humiliation were brought down upon them, and they became deserving of Allah's wrath; this was so because they disbelieved in the communications of Allah and killed the prophets unjustly; this was so because they disobeyed and exceeded the limits.
And when ye said: O Moses! We are weary of one kind of food; so call upon thy Lord for us that He bring forth for us of that which the earth groweth - of its herbs and its cucumbers and its corn and its lentils and its onions. He said: Would ye exchange that which is higher for that which is lower? Go down to settled country, thus ye shall get that which ye demand. And humiliation and wretchedness were stamped upon them and they were visited with wrath from Allah. That was because they disbelieved in Allah's revelations and slew the prophets wrongfully. That was for their disobedience and transgression.

The Children of Israel preferred Foods inferior to Manna and Quails

Allah said, "And remember My favor on you when I sent down the manna and quails to you, a good, pure, beneficial, easily acquired food. And remember your ungratefulness for what We granted you. Remember how you asked Musa to exchange this type of food for an inferior type that consists of vegetation, and so forth.''

Al-Hasan Al-Basri said about the Children of Israel,

"They were bored and impatient with the type of food they were provided. They also remembered the life they used to live, when their diet consisted of lentils, onions, garlic and herbs.''

They said, "O Musa ! We cannot endure one kind of food. So invoke your Lord for us to bring forth for us of what the earth grows, its herbs, its cucumbers, its Fum, its lentils and its onions.

the manna and quails, because they ate the same food day after day.

The Ayah mentioned lentils, onions and herbs, which are all known types of foods.

As for the Fum, Ibn Mas`ud read it, Thum (garlic).

He also said that;

the expression, `Fumu-lanna' means, `bake for us', according to the languages of old.

"If this is true, then `Fum' is one of the words whose pronunciations were altered, the letter `fa' was replaced by the letter `tha', since they are similar in sound.'' And Allah knows best.

Others said that Fum is wheat, the kind used for bread.

"Some of them said that Fum includes all grains or seeds that are eaten.''

criticized the Jews for asking for inferior foods, although they were living an easy life, eating tasty, beneficial and pure food.

Go you down to any Misr,

the Ayah refers to Misr, the Egypt of Fir`awn.

The truth is that the Ayah means any city, as Ibn Abbas and other scholars stated. Therefore, the meaning of Musa's statement to the Children of Israel becomes,

"What you are asking for is easy, for it is available in abundance in any city that you might enter. So since what you asked for is available in all of the villages and cities, I will not ask Allah to provide us with it, especially when it is an inferior type of food. ''

This is why Musa said to them,

Covering the Jews in Humiliation and Misery

And they were covered with humiliation and misery.

This Ayah indicates that the Children of Israel were plagued with humiliation, and that this will continue, meaning that it will never cease. They will continue to suffer humiliation at the hands of all who interact with them, along with the disgrace that they feel inwardly.

"Allah humiliated them, and they shall have no protector. Allah put them under the feet of the Muslims, who appeared at a time when the Majus (Zoroastrians) were taking the Jizyah (tax) from the Jews.''

and they drew on themselves the wrath of Allah,

"They went back with the wrath. Similarly, Allah said, إِنِّي أُرِيدُ أَن تَبُوءَ بِإِثْمِي وَإِثْمِكَ (Verily, I intend to let you draw my sin on yourself as well as yours), (5:29) meaning,

`You will end up carrying my, and your, mistakes instead of me'.

Thus, the meaning of the Ayah becomes,

That was because they used to disbelieve in the Ayat (proofs, evidences, etc.) of Allah and killed the Prophets wrongfully.

means, "This is what We rewarded the Children of Israel with: humiliation and misery.''

Allah's anger that descended on the Children of Israel was a part of the humiliation they earned, because of their defiance of the truth, disbelief in Allah's Ayat and belittling the carriers of Allah's Law i.e. the Prophets and their following. The Children of Israel rejected the Messengers and even killed them. Surely, there is no form of disbelief worse than disbelieving in Allah's Ayat and murdering the Prophets of Allah.

Similarly, in a Hadith recorded in the Two Sahihs the Messenger of Allah said,

Kibr, is refusing the truth and degrading (belittling) people.

The people who will receive the most torment on the Day of Resurrection are: a man who was killed by a Prophet or who killed a Prophet, an unjust ruler and one who mutilates (the dead).

That was because they disobeyed and used to transgress the bounds.

mentions another reason why the Children of Israel were punished in this manner, for they used to disobey and transgress the limits. Disobedience is to do what is prohibited, while transgression entails overstepping the set limits of what is allowed and what is prohibited. Allah knows best.