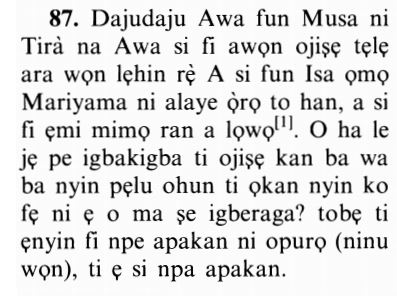 We gave Moses the Book and followed him up with a succession of messengers; We gave Jesus the son of Mary Clear (Signs) and strengthened him with the holy spirit. Is it that whenever there comes to you a messenger with what ye yourselves desire not, ye are puffed up with pride?- Some ye called impostors, and others ye slay!
And most certainly We gave Musa the Book and We sent messengers after him one after another; and We gave Isa, the son of Marium, clear arguments and strengthened him with the holy spirit, What! whenever then a messenger came to you with that which your souls did not desire, you were insolent so you called some liars and some you slew.
And verily We gave unto Moses the Scripture and We caused a train of messengers to follow after him, and We gave unto Jesus, son of Mary, clear proofs (of Allah's sovereignty), and We supported him with the Holy spirit. Is it ever so, that, when there cometh unto you a messenger (from Allah) with that which ye yourselves desire not, ye grow arrogant, and some ye disbelieve and some ye slay?

The Arrogance of the Jews who denied and killed Their Prophets

Allah described the insolence of Children of Israel, their rebelliousness, defiance and arrogance towards the Prophets, following their lusts and desires.

And indeed, We gave Musa the Book and followed him up with a succession of Messengers.

Allah mentioned that He gave Musa the Book, the Tawrah, and that the Jews changed, distorted, and defied its commands, as well as altered its meanings.

Allah sent Messengers and Prophets after Musa who followed his law, as Allah stated,

Verily, We did reveal the Tawrah (to Musa), therein was guidance and light, by which the Prophets, who submitted themselves to Allah's will, judged for the Jews. And the rabbis and the priests (too judged for the Jews by the Tawrah after those Prophets), for to them was entrusted the protection of Allah's Book, and they were witnesses thereto. (5:44)

while others said, "Followed".

Both meanings are plausible, since Allah said,

Then We sent Our Messengers in succession. (23:44)

And We gave `Isa, the son of Maryam, clear signs and supported him with Ruh-il-Qudus.

Thereafter, Allah sent the last Prophet among the Children of Israel, `Isa the son of Mary, who was sent with some laws that differed with some in the Tawrah.

This is why Allah also sent miracles to support `Isa. These included;

bringing the dead back to life,

forming the shape of birds from clay and blowing into them, after which they became living birds by Allah's leave,

healing the sick and foretelling the Unseen, as Ibn Abbas stated.

Allah also aided him with Ruh Al-Qudus, and that refers to Jibril.

All of these signs testified to the truthfulness of `Isa and what he was sent with. Yet, the Children of Israel became more defiant and envious of him and did not want to differ with even one part of the Tawrah, as Allah said about `Isa,

And to make lawful to you part of what was forbidden to you, and I have come to you with a proof from your Lord. (3:50)

All of this occurred because the Prophets used to command the Jews with what differed from their desires and opinions. The Prophets also upheld the rulings of the Tawrah that the Jews had changed, and this is why it was difficult for them to believe in these Prophets. Therefore, they rejected the Prophets and killed some of them.

Is it that whenever there came to you a Messenger with what you yourselves desired not, you grew arrogant!

The proof that Jibril is the Ruh Al-Qudus is the statement of Ibn Mas`ud in explanation of this Ayah.

O Allah! Aid Hassan with Ruh Al-Qudus, for he defended Your Prophet.

Abu Dawud recorded this Hadith in his Sunan as did At-Tirmidhi who graded it Hasan Sahih.

Further, Ibn Hibban recorded in his Sahih that Ibn Mas`ud said that the Prophet said,

Ruh Al-Qudus informed me that no soul shall die until it finishes its set provisions and term limit. Therefore, have Taqwa of Allah and seek your sustenance in the most suitable way.

The Jews tried to kill the Prophet

Some you disbelieved and some you kill.

"Allah did not say `killed' here, because the Jews would still try to kill the Prophet in the future, using poison and magic.''

During the illness that preceded his death, the Prophet said,

I kept feeling the effect of what I ate (from the poisoned sheep) during the day of Khyber, until now, when it is the time that the aorta will be cut off (meaning when death is near).

This Hadith was collected by Al-Bukhari and others