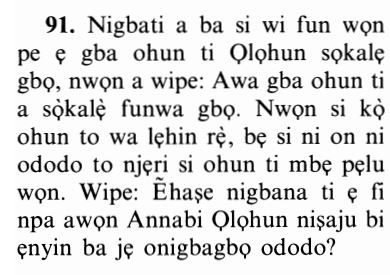 Although The Jews denied the Truth, They claimed to be Believers!

And when it is said to them,

meaning, the Jews and the People of the Book,

Believe in what Allah has sent down,

They say, "We believe in what was sent down to us.''

meaning, it is enough for us to believe in what was revealed to us in the Tawrah and the Injil, and this is the path that we choose.

And they disbelieve in that which came after it.

while it is the truth confirming what is with them.

meaning, while knowing that what was revealed to Muhammad.

This means that since what was sent to Muhammad conforms to what was revealed to the People of the Book, then this fact constitutes a proof against them.

Those to whom We gave the Scripture (Jews and Christians) recognize him (Muhammad) as they recognize their sons. (2:146)

"Why then have you killed the Prophets of Allah aforetime, if you indeed have been believers!''

This means, "If your claim that you believe in what was revealed to you is true, then why did you kill the Prophets who came to you affirming the Tawrah's Law, although you knew they were true Prophets! You killed them simply out of transgression, stubbornness and injustice with Allah's Messengers. Therefore, you only follow your lusts, opinions and desires.''