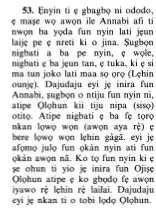 This is the Ayah of Hijab, which includes several legislative rulings and points of etiquette. This is one of the cases where the revelation confirmed the opinion of Umar bin Al-Khattab, may Allah be pleased with him, as it was reported in the Two Sahihs that he said:

"My view coincided with that of my Lord in three things.

And I said, `O Messenger of Allah, both righteous and immoral people enter upon your wives, so why do you not screen them!' Then Allah revealed the Ayah of Hijab.
*

And I said to the wives of the Prophet when they conspired against him out of jealousy, عَسَى رَبُّهُ إِن طَلَّقَكُنَّ أَن يُبْدِلَهُ أَزْوَجاً خَيْراً مِّنكُنَّ (It may be if he divorced you (all) that his Lord will give him instead of you, wives better than you) (66:5), and this is what Allah revealed.''

In a report recorded by Muslim, the prisoners of Badr are mentioned, and this is a fourth matter in which the view of Umar coincided with that of his Lord.

`O Messenger of Allah, both righteous and immoral people enter upon you, so why not instruct the Mothers of the believers to observe Hijab!'

Then Allah revealed the Ayah of Hijab.''

Al-Bukhari recorded that Anas bin Malik, may Allah be pleased with him, said:

"When the Messenger of Allah married Zaynab bint Jahsh, he invited the people to eat, then they sat talking. When he wanted to get up, they did not get up. When he saw that, he got up anyway, and some of them got up, but three people remained sitting. The Prophet wanted to go in, but these people were sitting, then they got up and went away.

I came and told the Prophet that they had left, then he came and entered.

I wanted to follow him, but he put the screen between me and him. Then Allah revealed,

O you who believe! Enter not the Prophet's houses, unless permission is given to you for a meal, (and then) not (so early as) to wait for its preparation. But when you are invited, enter, and when you have taken your meal, disperse...''

It was also recorded by Muslim and An-Nasa'i.

"The Prophet married Zaynab bint Jahsh with (a wedding feast of) meat and bread. I sent someone to invite people to the feast, and some people came and ate, then left. Then another group came and ate, and left. I invited people until there was no one left to invite.

I said, `O Messenger of Allah, I cannot find anyone else to invite.'

There were three people left who were talking in the house. The Prophet went out until he came to the apartment of A'ishah, may Allah be pleased with her, and he said, السَّلَامُ عَلَيْكُمْ أَهْلَ الْبَيْتِ وَرَحْمَةُ اللهِ وَبَرَكَاتُه (May peace be upon you, members of the household, and the mercy and blessings of Allah).

She said, `And upon you be peace and the mercy of Allah. How did you find your (new) wife, O Messenger of Allah May Allah bless you.'

He went round to the apartments of all his wives, and spoke with them as he had spoken with A'ishah, and they spoke as A'ishah had spoken. Then the Prophet came back, and those three people were still talking in the house.

The Prophet was extremely shy, so he went out and headed towards A'ishah's apartment.

I do not know whether I told him or someone else told him when the people had left, so he came back, and when he was standing with one foot over the threshold and the other foot outside, he placed the curtain between me and him, and the Ayah of Hijab was revealed.''

This was recorded only by Al-Bukhari among the authors of the Six Books, apart from An-Nasa'i, in Al-Yaum wal-Laylah.

Enter not the Prophet's houses,

Beware of entering upon women...

Then Allah makes an exception, when He says:

unless permission is given to you for a meal, (and then) not (so early as) to wait for its preparation.

Mujahid, Qatadah and others said:

"This means, without waiting for the food to be prepared.''

In other words, do not watch the food as it is being cooked to see if it is nearly ready, then come and enter the house, because this is one of the things that Allah dislikes and condemns. This indicates that it is forbidden to watch out for food being prepared, which is what the Arabs called Tatfil (being an uninvited guest).

Al-Khatib Al-Baghdadi wrote a book condemning those who watch out for food being prepared, and mentioned more things about this topic than we can quote here.

But when you are invited, enter, and when you have taken your meal, disperse,

In Sahih Muslim it is recorded that Ibn Umar, may Allah be pleased with him, said:

"The Messenger of Allah said:

When anyone of you invites his bother, let him respond, whether it is for a wedding or for any other reason.''

without sitting for a talk.

meaning, as those three people did who stayed behind and chatted, and forgot themselves to such an extent that this caused inconvenience for the Messenger of Allah as Allah says:

Verily, such (behavior) annoys the Prophet, and he is shy of (asking) you (to go);

It was said that what was meant was, your entering his houses without permission causes him inconvenience and annoyance, but he did not like to forbid them to do so because he felt too shy,' until Allah revealed that this was forbidden.

but Allah is not shy of (telling you) the truth.

meaning, `this is why He is forbidding and prohibiting you from doing that.'

And when you ask (his wives) for anything you want, ask them from behind a screen,

that is purer for your hearts and for their hearts.

And it is not (right) for you that you should annoy Allah's Messenger, nor that you should ever marry his wives after him (his death). Verily, with Allah that shall be an enormity.

Ibn Abi Hatim recorded that Ibn Abbas said concerning the Ayah; وَمَا كَانَ لَكُمْ أَن تُؤْذُوا رَسُولَ اللَّهِ (And it is not (right) for you that you should annoy Allah's Messenger),

"This was revealed concerning a man who wanted to marry one of the wives of the Prophet after he died.

He also reported with his chain of narration from As-Suddi that the one who wanted to do this was Talhah bin Ubaydullah, may Allah be pleased with him, until this Ayah was revealed forbidding that.

Hence the scholars were unanimous in stating that it was forbidden for anyone to marry any of the women who were married to the Messenger of Allah at the time when he died, because they are his wives in this world and in the Hereafter, and they are the Mothers of the believers, as stated previously. Allah regarded that as a very serious matter, and issued the sternest of warnings against it, as He said:

Verily, with Allah that shall be an enormity.