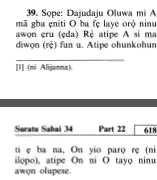 Say: "Verily my Lord enlarges and restricts the Sustenance to such of his servants as He pleases: and nothing do ye spend in the least (in His cause) but He replaces it: for He is the Best of those who grant Sustenance.
Say: Surely my Lord amplifies the means of subsistence for whom He pleases of His servants and straitens (them) for whom (He pleases), and whatever thing you spend, He exceeds it in reward, and He is the best of Sustainers.
Say: Lo! my Lord enlargeth the provision for whom He will of His bondmen, and narroweth (it) for him. And whatsoever ye spend (for good) He replaceth it. And He is the Best of Providers.

Say: "Truly, my Lord expands the provision for whom He wills of His servants, and (also) restricts (it) for him...''

means, according to His wisdom, He gives a lot of provision to one, and gives very little to another. He has great wisdom in doing so, which cannot be comprehended by anyone but Him.

See how We favor one above another, and verily, the Hereafter will be greater in degrees and greater in favor. (17:21)

This means that just as there are differences between them in this world -- where one may be poor and in straitened circumstances while another is rich and enjoys a life of plenty -- so they will be in the Hereafter. There one will reside in apartments in the highest levels of Paradise, whilst another will be in the lowest levels of Hell.

As the Prophet said, describing the best of people in this world:

He truly succeeds who becomes Muslim and is given just enough provision and Allah makes him content with what He has given.''

It was recorded by Muslim.

and whatsoever you spend of anything, He will replace it.

means, `whatever you spend in the ways that He has commanded you and permitted you, He will compensate you for it in this world by giving you something else instead, and in the Hereafter by giving you reward.'

It was reported that the Prophet said:

In another Hadith it is reported that;

And the Messenger of Allah said:

Spend, O Bilal, and do not fear that the One Who is on the Throne will withhold from you.

for He is the Best of those Who grant Sustenance.