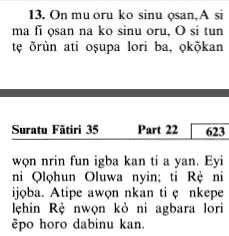 He merges Night into Day, and he merges Day into Night, and he has subjected the sun and the moon (to his Law): each one runs its course for a term appointed. Such is Allah your Lord: to Him belongs all Dominion. And those whom ye invoke besides Him have not the least power.
He causes the night to enter in upon the day, and He causes the day to enter in upon the night, and He has made subservient (to you) the sun and the moon; each one follows its course to an appointed time; this is Allah, your Lord, His is the kingdom; and those whom you call upon besides Him do not control a straw.
He maketh the night to pass into the day and He maketh the day to pass into the night. He hath subdued the sun and moon to service. Each runneth unto an appointed term. Such is Allah, your Lord; His is the Sovereignty; and those unto whom ye pray instead of Him own not so much as the white spot on a date-stone.

The gods of the Idolators do not even own a Qitmir

Another aspect of His perfect power and might is that He has subjugated the night with its darkness and the day with its light. He takes from the length of the one and adds it to the shortness of the other, until they become equal. Then He takes from the latter and adds to the former, so one becomes long and the other becomes short, so they take from one another in summer and in winter.

And He has subjected the sun and the moon,

and the stars and planets, with their light. All of them run in their appointed courses and in the manner prescribed for them, as decreed by the Almighty, All-Knowing.

each runs its course for a term appointed.

means, until the Day of Resurrection.

Such is Allah, your Lord.

means, the One Who has done all this is the Almighty Lord besides Whom there is no other true God.

And those, whom you invoke or call upon instead of Him,

means, `the idols and false gods whom you claim to be in the form of angels who are close to Allah,'

own not even a Qitmir.

Ibn Abbas, may Allah be pleased with him, Mujahid, Ikrimah, Ata, Atiyah Al-Awfi, Al-Hasan, Qatadah and others said,

This is the thread that is attached to the pit of a date. In other words, they do not possess anything in the heavens or on earth, not even anything equivalent to this Qitmir.