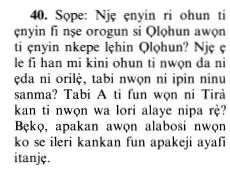 The Helplessness of the false gods and the Power of Allah

Allah tells His Messenger to say to the idolators:

Say: "Have you considered your partners whom you call upon besides Allah,

i.e. the idols and rivals.

Show Me what they have created of the earth. Or have they any share in the heavens!

meaning, they have nothing at all of that, they do not possess even the membrane covering the stone of a date.

Or have We given them a Book, so that they act on clear proof therefrom!

meaning, `have We revealed to them a Book on which they base their Shirk and disbelief?'

This is not the case at all.

Nay, the wrongdoers promise one another nothing but delusions.

means, they are merely following their own whims, opinions and wishes which are their personal desires, and they are no more than misguidance and falsehood.

Then Allah tells us of His mighty power, by which the heavens and the earth stand by His command, and the forces that He has placed between them to hold them.