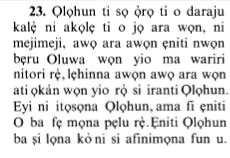 Allah has revealed (from time to time) the most beautiful Message in the form of a Book, consistent with itself, (yet) repeating (its teaching in various aspects): the skins of those who fear their Lord tremble thereat; then their skins and their hearts do soften to the celebration of Allah's praises. Such is the guidance of Allah: He guides therewith whom He pleases, but such as Allah leaves to stray, can have none to guide.
Allah has revealed the best announcement, a book conformable in its various parts, repeating, whereat do shudder the skins of those who fear their Lord, then their skins and their hearts become pliant to the remembrance of Allah; this is Allah's guidance, He guides with it whom He pleases; and (as for) him whom Allah makes err, there is no guide for him.
Allah hath (now) revealed the fairest of statements, a Scripture consistent, (wherein promises of reward are) paired (with threats of punishment), whereat doth creep the flesh of those who fear their Lord, so that their flesh and their hearts soften to Allah's reminder. Such is Allah's guidance, wherewith He guideth whom He will. And him whom Allah sendeth astray, for him there is no guide.

The Description of the Qur'an

Here Allah praises His Book, the Noble Qur'an, which was revealed to His noble Messenger.

Allah has sent down the Best Statement, a Book, its parts resembling each other (and) oft-repeated.

"This means that the entire Qur'an's parts resemble each other and are oft-repeated.''

"It is oft-repeated so that people will understand what their Lord tells them.''

"There may be an Ayah in one Surah, and another Ayah in another Surah that resembles it.''

Sa`id bin Jubayr narrated from Ibn Abbas, may Allah be pleased with him:

"Oft-repeated means that parts of the Qur'an resemble one another and repeat one another.''

Some of the scholars said that it was narrated from Sufyan bin `Uyaynah that مُّتَشَابِهًا مَّثَانِيَ (its parts resembling each other (and) oft-repeated), means,

that some passages of the Qur'an may sometimes refer to one thing, so they resemble one another, and sometimes they mention a thing and its opposite. Such as when the believers then the disbelievers are mentioned, or when Paradise then Hell are described, and so on, and this is the meaning of oft-repeated.

Examples include the Ayat:

And there are other similar passages. All of this has to do with it being oft-repeated, i.e., when two meanings are referred to. But when a passage is about one thing, with some parts of it resembling others, this is;

"its parts resembling each other.''

This is not the same as the Mutashabihat mentioned in the Ayah:

that refers to something else altogether.

The skins of those who fear their Lord shiver from it. Then their skin and their heart soften to the remembrance of Allah.

means, this is the description of the righteous, when they hear the Words of the Compeller, the Protector, the Almighty, the Oft-Forgiving, because they understand the promises and warnings contained therein. The frightening words and threats make their skin shiver from fear.

ثُمَّ تَلِينُ جُلُودُهُمْ وَقُلُوبُهُمْ إِلَى ذِكْرِ اللَّهِ (Then their skin and their heart soften to the remembrance of Allah), because of their hope for His mercy and kindness. They are unlike others, the wicked, immoral sinners, in a number of ways:

- First They listen to the recitation of the Ayat (of the Qur'an), while those (sinners) listen to poetic verse recited by female singers.

- Second When the Ayat of Ar-Rahman are recited to them, they fall down in prostration weeping, with the proper attitude of fear, hope, love, understanding and knowledge, as Allah says:

The believers are only those who, when Allah is mentioned, feel a fear in their hearts and when His Ayat are recited unto them, they increase their faith; and they put their trust in their Lord; Who perform the Salah and spend out of that We have provided them. It is they who are the believers in it.

For them are grades of dignity with their Lord, and forgiveness and a generous provision (i.e., Paradise). (8:2-4)

And those who, when they are reminded of the Ayat of their Lord, fall not on them (as if they were) deaf and blind. (25:73)

When they hear the Ayat of Allah, they are not too busy to pay attention to them; they listen to them and understand their meanings. So they act upon them and prostrate when they hear them, out of understanding, not out of ignorance and blind following of others.

- Third they adhere to the correct etiquette when they listen to them. As the Companions, may Allah be pleased with them, used to do when they listened to the words of Allah recited by the Messenger of Allah. Their skin would shiver, and their hearts would soften to the remembrance of Allah. They did not shout or do other actions that are not natural; on the contrary, they would sit quietly with the proper attitude of fear, in an unparalleled fashion. They attained the victory of praise from their Lord in this world and the Hereafter.

Abdur-Razzaq said, "Ma`mar told us that Qatadah, may Allah have mercy on him, recited, تَقْشَعِرُّ مِنْهُ جُلُودُ الَّذِينَ يَخْشَوْنَ رَبَّهُمْ ثُمَّ تَلِينُ جُلُودُهُمْ وَقُلُوبُهُمْ إِلَى ذِكْرِ اللَّهِ (The skins of those who fear their Lord shiver from it. Then their skin and their heart soften to the remembrance of Allah), and said,

That is the guidance of Allah. He guides therewith whom He wills;

and whomever Allah sends astray, for him there is no guide.