ALL THE WORLDS - ALL BEINGS, ANGELS, GLORIFICATION, PRAISE, FULFILLING PROMISES, THRONE, THE 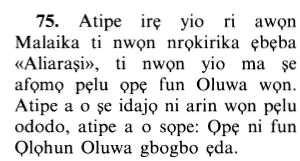 And you will see the angels surrounding the Throne from all round, glorifying the praises of their Lord.

Allah tells us how He will pass judgement on the people of Paradise and Hell, and put each of them in the place fitting for him and for which he is suited; this is justice from Him and He is never unjust.

Then He tells us of His angels who surround His majestic Throne, glorifying the praises of their Lord, extolling and magnifying Him, and declaring Him to be above any shortcomings or injustice whatsoever, for He has passed judgement in the fairest and most just manner.

And they will be judged,

meaning, all of creation.

And it will be said,

"All the praises and thanks be to Allah, the Lord of all that exits.''

meaning, all of creation, whether animate or inanimate, will speak words of praise to Allah, the Lord of all that exists, for His wisdom and justice. These words are not attributed to any specific speaker, which indicates that the whole of creation will testify to His praise.

"Allah began His creation with praise, as He said,

All praises and thanks be to Allah, Who created the heavens and the earth (6:1).

and He ended it with praise, as He says:

And they will be judged with truth. And it will be said, "All the praises and thanks be to Allah, the Lord of all that exists.''.''

This is the end of the Tafsir of Surah Az-Zumzr. All praise and thanks are due to Allah and in Him is all strength and protection.