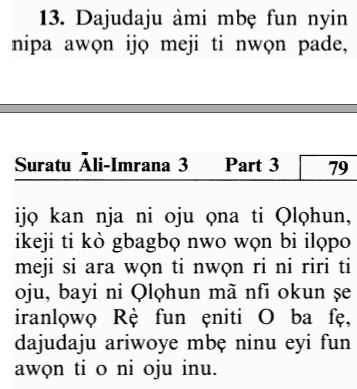 "There has already been for you a Sign in the two armies that met (in combat): One was fighting in the cause of Allah, the other resisting Allah; these saw with their own eyes Twice their number. But Allah doth support with His aid whom He pleaseth. In this is a warning for such as have eyes to see."
Indeed there was a sign for you in the two hosts (which) met together in encounter; one party fighting in the way of Allah and the other unbelieving, whom they saw twice as many as themselves with the sight of the eye and Allah strengthens with His aid whom He pleases; most surely there is a lesson in this for those who have sight.
There was a token for you in two hosts which met: one army fighting in the way of Allah, and another disbelieving, whom they saw as twice their number, clearly, with their very eyes. Thus Allah strengtheneth with His succour whom He will. Lo! herein verily is a lesson for those who have eyes.

when the Messenger of Allah gained victory in the battle of Badr and went back to Al-Madinah, he gathered the Jews in the marketplace of Bani Qaynuqa.

meaning, O Jews, who said what you said! You have an Ayah, meaning proof, that Allah will make His religion prevail, award victory to His Messenger, make His Word apparent and His religion the highest.

In the two armies,

in combat (in Badr).

One was fighting in the Cause of Allah, (the Muslims),

And as for the other, in disbelief.

meaning, the idolators of Quraysh at Badr.

They saw them with their own eyes twice their number,

means, the idolators thought that the Muslims were twice as many as they were, for Allah made this illusion a factor in the victory that Islam had over them.

It was said that the meaning of Allah's statement, يَرَوْنَهُم مِّثْلَيْهِمْ رَأْيَ الْعَيْنِ (They saw them with their own eyes twice their number),

is that the Muslims saw twice as many idolators as they were, yet Allah gave them victory over the disbelievers.

And (remember) when you met, He showed them to you as few in your eyes and He made you appear as few in their eyes." (8:44)

so that Allah might accomplish a matter already ordained. (8:42),

meaning, so that the truth and falsehood are distinguishable, and thus the word of faith prevails over disbelief and deviation, so that the believers prevail and the disbelievers are humiliated.

In a similar statement, Allah said;

And Allah has already made you victorious at Badr, when you were a weak little force. (3:123)

In this Ayah Allah said,

And Allah supports with His victory whom He wills. Verily, in this is a lesson for those who understand.

meaning, this should be an example for those who have intelligence and sound comprehension. They should contemplate about Allah's wisdom, decisions and decree, that He gives victory to His believing servants in this life and on the Day the witnesses stand up to testify.