GARDEN, THE (I. E. PARADISE), PLEASURE OF ALLAH, RIVER, WIFE 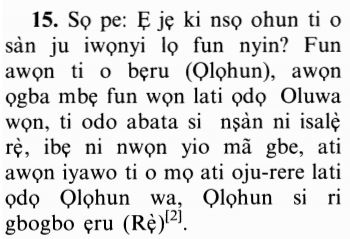 Say: Shall I give you glad tidings of things Far better than those? For the righteous are Gardens in nearness to their Lord, with rivers flowing beneath; therein is their eternal home; with companions pure (and holy); and the good pleasure of Allah. For in Allah's sight are (all) His servants,-
Say:Shall}I tell you what is better than these? For those who guard (against evil) are gardens with their Lord, beneath which rivers flow, to abide in them, and pure mates and Allah's pleasure; and Allah sees the servants.
Say: Shall I inform you of something better than that? For those who keep from evil, with their Lord, are Gardens underneath which rivers flow wherein they will abide, and pure companions, and contentment from Allah. Allah is Seer of His bondmen,

Say: "Shall I inform you of things far better than those!''

This Ayah means, "Say, O Muhammad, to the people, `Should I tell you about what is better than the delights and joys of this life that will soon perish!'''

Allah informed them of what is better when He said,

For those who have Taqwa there are Gardens (Paradise) with their Lord, underneath which rivers flow,

meaning, rivers run throughout it.

These rivers carry various types of drinks: honey, milk, wine and water such that no eye has ever seen, no ear has ever heard, and no heart has ever imagined.

Therein (is their) eternal (home),

meaning, they shall remain in it forever and ever and will not want to be removed from it.

meaning, from filth, dirt, harm, menstruation, post birth bleeding, and other things that affect women in this world.

And Allah will be pleased with them.

meaning, Allah's pleasure will descend on them and He shall never be angry with them after that. This is why Allah said in in Surah Bara`ah,

meaning, greater than the eternal delight that He has granted them.

And Allah is All-Seer of the (His) servants.

and, He gives each provisions according to what they deserve.