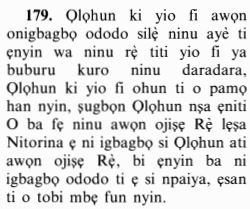 (It is not (the purpose) of Allah to leave you in your present stateﾅ) [3:179]. Al-Suddi reported that the Messenger of Allah, Allah bless him and give him peace, said: ﾓThe members of my community were shown to me in their forms, as they were shown to Adam, and I was informed about who would believe in me and
who would disbelieveﾔ. When the hypocrites heard this, they mocked him, saying: ﾓMuhammad claims that he knows who would believe in him and who would not. Yet, we are in his midst and he does not know usﾔ, and so Allah revealed this verse. Said al-Kalbi: ﾓThe people of Quraysh said: O Muhammad! You claim that whoever opposes you will go to hellfire and Allah would be angry with him whereas whoever believes in you will go to the Garden and Allah will be pleased with him. In that case, inform us about who would believe in you and who would not?ﾒ And as a response, Allah, exalted is He, revealed this verseﾔ. And Abuﾒl-Aliyah said: ﾓThe believers had asked about a sign by means of which they would differentiate between the believers and the hypocrites and so Allah. Exalted is He, revealed this verseﾔ.

Allah will not leave the believers in the state in which you are now, until He distinguishes the wicked from the good.

meaning, He allows a calamity to happen, and during this calamity His friend becomes known and His enemy exposed, the patient believer recognized and the sinful hypocrite revealed.

This Ayah refers to Uhud, since Allah tested the believers in that battle, thus making known the faith, endurance, patience, firmness and obedience to Allah and His Messenger that the believers had. Allah exposed the hypocrites in their defiance, reverting from Jihad, and the treachery they committed against Allah and His Messenger. This is why Allah said, مَّا كَانَ اللّهُ لِيَذَرَ الْمُؤْمِنِينَ عَلَى مَآ أَنتُمْ عَلَيْهِ حَتَّىَ يَمِيزَ الْخَبِيثَ مِنَ الطَّيِّبِ (Allah will not leave the believers in the state in which you are now, until He distinguishes the wicked from the good).

"He distinguished between them during the day of Uhud.''

"He distinguished between them in Jihad and Hijrah.''

Nor will Allah disclose to you the secrets of the Unseen.

meaning, you do not have access to Allah's knowledge of His creation so that you can distinguish between the believer and the hypocrite, except by the signs of each type that Allah uncovers.

but Allah chooses of His Messengers whom He wills.

is similar to another Ayah,

(He Alone is) the All-Knower of the Unseen, and He reveals to none His Unseen. Except to a Messenger (from mankind) whom He has chosen, and then He makes a band of watching guards (angels) to march before him and behind him. (72:26-27)

So believe in Allah and His Messengers.

Obey Allah and His Messenger and adhere to the law that he legislated for you.

and if you believe and fear Allah, then for you there is a great reward.