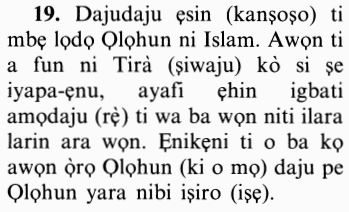 The Religion before Allah is Islam (submission to His Will): Nor did the People of the Book dissent therefrom except through envy of each other, after knowledge had come to them. But if any deny the Signs of Allah, Allah is swift in calling to account.
Surely the (true) religion with Allah is Islam, and those to whom the Book had been given did not show opposition but after knowledge had come to them, out of envy among themselves; and whoever disbelieves in the communications of Allah then surely Allah is quick in reckoning.
Lo! religion with Allah (is) the Surrender (to His Will and Guidance). Those who (formerly) received the Scripture differed only after knowledge came unto them, through transgression among themselves. Whoso disbelieveth the revelations of Allah (will find that) lo! Allah is swift at reckoning.

The Religion with Allah is Islam

Truly, the religion with Allah is Islam.

Allah states that there is no religion accepted with Him from any person, except Islam.

Islam includes obeying all of the Messengers until Muhammad who finalized their commission, thus closing all paths to Allah except through Muhammad. Therefore, after Allah sent Muhammad, whoever meets Allah following a path other than Muhammad's, it will not be accepted of him.

And whoever seeks a religion other than Islam, it will never be accepted of him. (3:85)

In this Ayah (3:19) Allah said, asserting that the only religion accepted with Him is Islam, إِنَّ الدِّينَ عِندَ اللّهِ الإِسْلاَمُ (Truly, the religion with Allah is Islam).

Allah then states that those who were given the Scripture beforehand divided in the religion after Allah sent the Messengers and revealed the Books to them providing them the necessary proofs to not do so.

Those who were given the Scripture (Jews and Christians) did not differ except out of rivalry, after knowledge had come to them.

meaning, some of them wronged others. Therefore, they differed over the truth, out of envy, hatred and enmity for each other. This hatred made some of them defy those whom they hated even if they were correct.

And whoever disbelieves in the Ayat of Allah,

meaning, whoever rejects what Allah sent down in His Book.

then surely, Allah is Swift in reckoning.

Allah will punish him for his rejection, reckon him for his denial, and torment him for defying His Book.