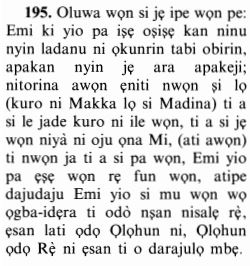 And their Lord hath accepted of them, and answered them: "Never will I suffer to be lost the work of any of you, be he male or female: Ye are members, one of another: Those who have left their homes, or been driven out therefrom, or suffered harm in My Cause, or fought or been slain,- verily, I will blot out from them their iniquities, and admit them into Gardens with rivers flowing beneath;- A reward from the presence of Allah, and from His presence is the best of rewards."
So their Lord accepted their prayer: That I will not waste the work of a worker among you, whether male or female, the one of you being from the other; they, therefore, who fled and were turned out of their homes and persecuted in My way and who fought and were slain, I will most certainly cover their evil deeds, and I will most certainly make them enter gardens beneath which rivers flow; a reward from Allah, and with Allah is yet better reward.
And their Lord hath heard them (and He saith): Lo! I suffer not the work of any worker, male or female, to be lost. Ye proceed one from another. So those who fled and were driven forth from their homes and suffered damage for My cause, and fought and were slain, verily I shall remit their evil deeds from them and verily I shall bring them into Gardens underneath which rivers flow - A reward from Allah. And with Allah is the fairest of rewards.

(And their Lord hath heard themﾅ) [3:195]. Ismail ibn Ibrahim al-Nasrabadhi informed us> Abu Amr Ismail ibn Najid> Jafar ibn Muhammad ibn Suwar> Qutaybah ibn Said> Sufyan> Amr ibn Dinar> Salamah ibn Umar ibn Abi Salamah (a man from the Banu Salamah) who said: ﾓUmm Salamah said: O Messenger of
Allah! Allah has not mentioned women with regard to migration at all, and Allah, exalted is He, revealed (And their Lord hath heard them (and He saith): Lo! I suffer not the work of any worker, male or female, to be lost. Ye proceed one from another)ﾔ. This was narrated by al-Hakim Abu Abd Allah in his Sahih from Abu Awn Muhammad ibn Ahmad ibn Mahan> Muhammad ibn Ali ibn Yazid> Yaqub ibn Humayd> Sufyan.

Allah Accepts the Supplication of Men of Understanding

So their Lord accepted of them,

Sa`id bin Mansur recorded that Salamah, a man from the family of Umm Salamah said,

Allah sent down the Ayah, فَاسْتَجَابَ لَهُمْ رَبُّهُمْ أَنِّي لاَ أُضِيعُ عَمَلَ عَامِلٍ مِّنكُم مِّن ذَكَرٍ أَوْ أُنثَى (So their Lord accepted of them (their supplication and answered them), "Never will I allow to be lost the work of any of you, be he male or female).

The Ansar say that Umm Salamah was the first woman to migrate to them.''

Al-Hakim collected this Hadith in his Mustadrak, and said, "It is Sahih according to the criteria of Al-Bukhari but they (Al-Bukhari and Muslim) did not collect it''.

"Never will I allow to be lost the work of any of you, be he male or female,

explains the type of answer Allah gave them, stating that no deed of any person is ever lost with Him. Rather, He will completely reward each person for his or her good deeds.

You are (members) one of another,

means, you are all equal in relation to gaining My reward.

by leaving the land of Shirk and migrating to the land of faith, leaving behind their loved ones, brethren, friends and neighbors.

and were driven out from their homes,

when the Mushriks tormented them and forced them to migrate.

and suffered harm in My cause,

for their only wrong, to the people, was that they believed in Allah Alone.

and have driven out the Messenger and yourselves because you believe in Allah your Lord! (60:1)

And they had no fault except that they believed in Allah, the Almighty, Worthy of all praise! (85:8)

and who fought and were killed (in My cause),

refers to the highest rank there is, that one fights in the cause of Allah and dies in the process, with his face covered in dust and blood.

It is recorded in the Sahih that a man said,

'O Messenger of Allah! If I was killed in Allah's cause, observing patience, awaiting Allah's reward, attacking, not retreating, would Allah forgive my sins?'

The Prophet then asked the man, `What did you ask?'

When the man repeated the question, the Prophet said,

`Yes, except for the debt, for Jibril conveyed this to me right now'.

verily, I will expiate from them their evil deeds and admit them into Gardens under which rivers flow,

within Paradise, where there are rivers of various drinks: milk, honey, wine and fresh water. There is what no eye has ever seen, no ear has ever heard and no heart has ever imagined (of delights in Paradise).

a reward from Allah,

testifies to His might, for the Mighty and Most Great only gives tremendous rewards.

and with Allah is the best of rewards.''

for those who perform good deeds.