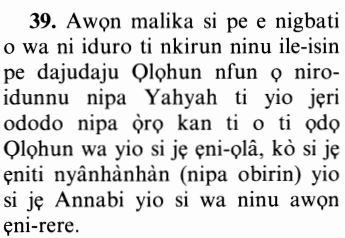 Then the angels called him, while he was standing in prayer in the Mihrab,

meaning, the angels spoke to him directly while he was secluded, standing in prayer at his place of worship.

Allah told us about the good news that the angels delivered to Zakariyya,

of a child from your offspring, his name is Yahya.

Qatadah and other scholars said that;

he was called Yahya (literally, `he lives') because Allah filled his life with faith.

believing in the Word from Allah.

This does not mean that he does not marry women and have legal sexual relations with them, for Zakariyya said in his supplication for the benefit of Yahya, هَبْ لِي مِن لَّدُنْكَ ذُرِّيَّةً طَيِّبَةً (Grant me from You, a good offspring), meaning, grant me a son who will have offspring, and Allah knows best.

A Prophet, from among the righteous.

delivers more good news of sending Yahya as Prophet after the good news that he will be born. This good news was even better than the news of Yahya's birth.

In a similar statement, Allah said to the mother of Musa,

Verily, We shall bring him back to you, and shall make him one of the Messengers. (28:7)

When Zakariyya heard the good news, he started contemplating about having children at his age.