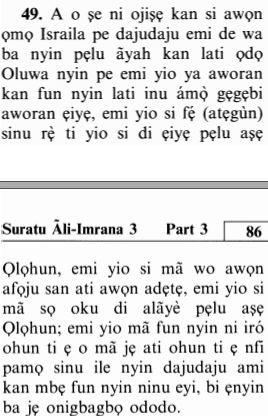 And will make him a Messenger to the Children of Israel,

means, that Allah will send `Isa as a Messenger to the Children of Israel, proclaiming to them,

I have come to you with a sign from your Lord, that I design for you out of clay, a figure like that of a bird, and breathe into it, and it becomes a bird by Allah's leave.

These are the miracles that `Isa performed; he used to make the shape of a bird from clay and blow into it, and it became a bird by Allah's leave. Allah made this a miracle for `Isa to testify that He had sent him.

And I heal him who is Akmah,

meaning, `a person who was born blind,' which perfects this miracle and makes the challenge more daring.

which is a known disease.

And I bring the dead to life by Allah's leave.

Many scholars stated that Allah sent every Prophet with a miracle suitable to his time.

For instance, in the time of Musa, magic was the trade of the time, and magicians held a high position. So Allah sent Musa with a miracle that captured the eyes and bewildered every magician. When the magicians realized that Musa's miracle came from the Almighty, Most Great, they embraced Islam and became pious believers.

As for `Isa, he was sent during a time when medicine and knowledge in physics were advancing. `Isa brought them the types of miracles that could not be performed, except by one sent by Allah. How can any physician bring life to clay, cure blindness and leprosy and bring back to life those entrapped in the grave!

Muhammad was sent during the time of eloquent people and proficient poets. He brought them a Book from Allah; if mankind and the Jinn tried to imitate ten chapters, or even one chapter of it, they will utterly fail in this task, even if they tried to do it by collective cooperation. This is because the Qur'an is the Word of Allah and is nothing like that of the creatures.

And I inform you of what you eat, and what you store in your houses,

means, I tell you about what one of you has just eaten and what he is keeping in his house for tomorrow.

testifying to the truth of what I was sent to you with.