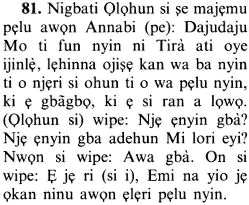 Behold! Allah took the covenant of the prophets, saying: "I give you a Book and Wisdom; then comes to you a messenger, confirming what is with you; do ye believe in him and render him help." Allah said: "Do ye agree, and take this my Covenant as binding on you?" They said: "We agree." He said: "Then bear witness, and I am with you among the witnesses."
And when Allah made a covenant through the prophets: Certainly what I have given you of Book and wisdom-- then an messenger comes to you verifying that which is with you, you must believe in him, and you must aid him. He said: Do you affirm and accept My compact in this (matter)? They said: We do affirm. He said: Then bear witness, and I (too) am of the bearers of witness with you.
When Allah made (His) covenant with the prophets, (He said): Behold that which I have given you of the Scripture and knowledge. And afterward there will come unto you a messenger, confirming that which ye possess. Ye shall believe in him and ye shall help him. He said: Do ye agree, and will ye take up My burden (which I lay upon you) in this (matter)? They answered: We agree. He said: Then bear ye witness. I will be a witness with you.

Taking a Pledge From the Prophets to Believe in Our Prophet, Muhammad

Allah states that He took a pledge from every Prophet whom He sent from Adam until `Isa, that when Allah gives them the Book and the Hikmah, thus acquiring whatever high grades they deserve, then a Messenger came afterwards, they would believe in and support him.

Even though Allah has given the Prophets the knowledge and the Prophethood, this fact should not make them refrain from following and supporting the Prophet who comes after them. This is why Allah, the Most High, Most Honored, said,

And (remember) when Allah took the covenant of the Prophets, saying: "Take whatever I gave you from the Book and Hikmah.''

meaning, if I give you the Book and the Hikmah,

"and afterwards there will come to you a Messenger confirming what is with you; you must, then, believe in him and help him.''

"The responsibility of My covenant that you took,''

meaning, the ratified pledge that you gave Me.

He said: "Then bear witness; and I am with you among the witnesses.''