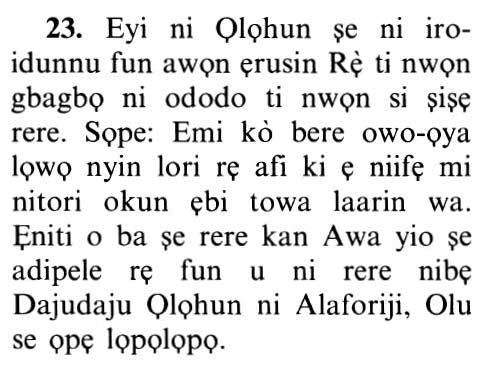 That is (the Bounty) whereof Allah gives Glad Tidings to His Servants who believe and do righteous deeds. Say: "No reward do I ask of you for this except the love of those near of kin." And if any one earns any good, We shall give him an increase of good in respect thereof: for Allah is Oft-Forgiving, Most Ready to appreciate (service).
That is of which Allah gives the good news to His servants, (to) those who believe and do good deeds. Say: I do not ask of you any reward for it but love for my near relatives; and whoever earns good, We give him more of good therein; surely Allah is Forgiving, Grateful.
This it is which Allah announceth unto His bondmen who believe and do good works. Say (O Muhammad, unto mankind): I ask of you no fee therefor, save lovingkindness among kinsfolk. And whoso scoreth a good deed We add unto its good for him. Lo! Allah is Forgiving, Responsive.

(Say (O Muhammad, unto mankind): I ask of you no fee therefor, save loving kindness among kinsfolkﾅ) [42:23]. Said Ibn Abbas: ﾓWhen the Messenger of Allah, Allah bless him and give him peace, migrated to Medina, he went through periods of time when he faced needs and rights which he had to address but did
not have the means to do so. The Helpers said: Allah, exalted is He, has guided you through this man who is the son of your sister. He faces lifeﾒs vicissitudes and has rights but does not have the means to fulfil them. Collect for him from your wealth that which will not hurt you and give it to him so that he uses it to
help himself with the ups and downs of lifeﾒ. They collected some wealth and took it to him. They said: O Messenger of Allah, you are the son of our sister, and Allah, exalted is He, has guided us through you.
Sometimes you go through ups and downs in life and you also have rights to address. But you do not have the means to face up to all of this. We thought to collect for you some of our wealth so that you can use it when you need it. Here it isﾒ. This verse was then revealedﾔ.

Having mentioned the gardens of Paradise, Allah then says to His servants who believe and do righteous deeds:

That is whereof Allah gives glad tidings to His servants who believe and do righteous good deeds.

meaning, this will undoubtedly come to them, because it is glad tidings from Allah to them.

Say: "No reward do I ask of you for this except to be kind to me for my kinship with you.''

means, `say, O Muhammad, to these idolators among the disbeliever of Quraysh: I do not ask you for anything in return for this message and sincere advice which I bring to you. All I ask of you is that you withhold your evil from me and let me convey the Messages of my Lord. If you will not help me, then do not disturb me, for the sake of the ties of kinship that exist between you and I.'

Al-Bukhari recorded that Ibn Abbas, may Allah be pleased with him, was asked about the Ayah: إِلَّا الْمَوَدَّةَ فِي الْقُرْبَى (except to be kind to me for my kinship with you).

Sa`id bin Jubayr said, "To be kind to the family of Muhammad.''

Ibn Abbas said, "No, you have jumped to a hasty conclusion. There was no clan among Quraysh to whom the Prophet did not have some ties of kinship.''

Ibn Abbas said, "Except that you uphold the ties of kinship that exist between me and you.''

This was recorded by Al-Bukhari.

It was also recorded by Imam Ahmad with a different chain of narration.

And whoever earns a good righteous deed, We shall give him an increase of good in respect thereof,

means, `whoever does a good deed, We will increase him in good for it, i.e., in reward.'

Surely, Allah wrongs not even of the weight of a speck of dust, but if there is any good, He doubles it, and gives from Him a great reward. (4:40)

Verily, Allah is Oft-Forgiving, Most Ready to appreciate.

means, He forgives many bad deeds and increases a small amount of good deeds;

He conceals and forgives sins and He multiplies and increases the reward of good deeds.