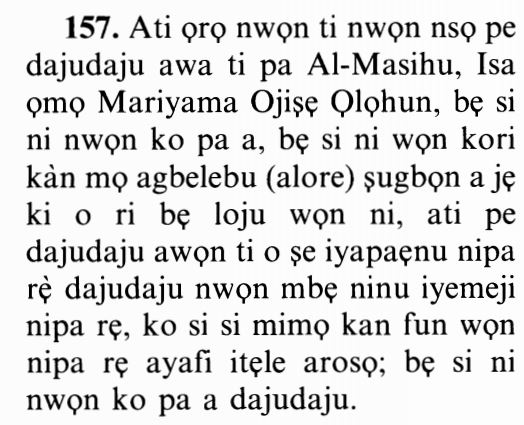 That they said (in boast), "We killed Christ Jesus the son of Mary, the Messenger of Allah";- but they killed him not, nor crucified him, but so it was made to appear to them, and those who differ therein are full of doubts, with no (certain) knowledge, but only conjecture to follow, for of a surety they killed him not:-
And their saying: Surely we have killed the Messiah, Isa son of Marium, the messenger of Allah; and they did not kill him nor did they crucify him, but it appeared to them so (like Isa) and most surely those who differ therein are only in a doubt about it; they have no knowledge respecting it, but only follow a conjecture, and they killed him not for sure.
And because of their saying: We slew the Messiah, Jesus son of Mary, Allah's messenger - they slew him not nor crucified him, but it appeared so unto them; and lo! those who disagree concerning it are in doubt thereof; they have no knowledge thereof save pursuit of a conjecture; they slew him not for certain.

And because of their saying, "We killed Al-Masih, `Isa, son of Maryam, the Messenger of Allah,''

meaning, we killed the person who claimed to be the Messenger of Allah. The Jews only uttered these words in jest and mockery, just as the polytheists said, يَا أَيُّهَا الَّذِي نُزِّلَ عَلَيْهِ الذِّكْرُ إِنَّكَ لَمَجْنُونٌ (O you to whom the Dhikr (the Qur'an) has been sent down! Verily, you are a mad man!). (15:6)

When Allah sent `Isa with proofs and guidance, the Jews, may Allah's curses, anger, torment and punishment be upon them, envied him because of his Prophethood and obvious miracles; curing the blind and leprous and bringing the dead back to life, by Allah's leave. He also used to make the shape of a bird from clay and blow in it, and it became a bird by Allah's leave and flew.

`Isa performed other miracles that Allah honored him with, yet the Jews defied and bellied him and tried their best to harm him. Allah's Prophet `Isa could not live in any one city for long and he had to travel often with his mother, peace be upon them. Even so, the Jews were not satisfied, and they went to the king of Damascus at that time, a Greek polytheist who worshipped the stars. They told him that there was a man in Bayt Al-Maqdis misguiding and dividing the people in Jerusalem and stirring unrest among the king's subjects.

The king became angry and wrote to his deputy in Jerusalem to arrest the rebel leader, stop him from causing unrest, crucify him and make him wear a crown of thorns.

When the king's deputy in Jerusalem received these orders, he went with some Jews to the house that `Isa was residing in, and he was then with twelve, thirteen or seventeen of his companions. That day was a Friday, in the evening.

They surrounded `Isa in the house, and when he felt that they would soon enter the house or that he would sooner or later have to leave it, he said to his companions, "Who volunteers to be made to look like me, for which he will be my companion in Paradise?''

Allah made the young man look exactly like `Isa, while a hole opened in the roof of the house, and `Isa was made to sleep and ascended to heaven while asleep. Allah said, إِذْ قَالَ اللّهُ يَا عِيسَى إِنِّي مُتَوَفِّيكَ وَرَافِعُكَ إِلَيَّ (And (remember) when Allah said: "O `Isa! I will take you and raise you to Myself).'' (3:55)

When `Isa ascended, those who were in the house came out. When those surrounding the house saw the man who looked like `Isa, they thought that he was `Isa. So they took him at night, crucified him and placed a crown of thorns on his head. The Jews then boasted that they killed `Isa and some Christians accepted their false claim, due to their ignorance and lack of reason.

As for those who were in the house with `Isa, they witnessed his ascension to heaven, while the rest thought that the Jews killed `Isa by crucifixion. They even said that Maryam sat under the corpse of the crucified man and cried, and they say that the dead man spoke to her.

All this was a test from Allah for His servants out of His wisdom. Allah explained this matter in the Glorious Qur'an which He sent to His honorable Messenger, whom He supported with miracles and clear, unequivocal evidence. Allah is the Most Truthful, and He is the Lord of the worlds Who knows the secrets, what the hearts conceal, the hidden matters in heaven and earth, what has occurred, what will occur, and what would occur if it was decreed.

but they killed him not, nor crucified him, but it appeared as that to them,

referring to the person whom the Jews thought was `Isa.

This is why Allah said afterwards,

and those who differ therein are full of doubts. They have no (certain) knowledge, they follow nothing but conjecture.

referring to the Jews who claimed to kill `Isa and the ignorant Christians who believed them. Indeed they are all in confusion, misguidance and bewilderment.

For surely; they killed him not.

meaning they are not sure that `Isa was the one whom they killed. Rather, they are in doubt and confusion over this matter.