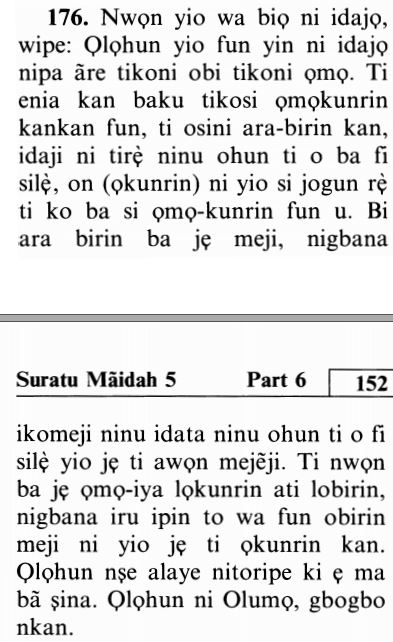 They ask thee for a legal decision. Say: Allah directs (thus) about those who leave no descendants or ascendants as heirs. If it is a man that dies, leaving a sister but no child, she shall have half the inheritance: If (such a deceased was) a woman, who left no child, Her brother takes her inheritance: If there are two sisters, they shall have two-thirds of the inheritance (between them): if there are brothers and sisters, (they share), the male having twice the share of the female. Thus doth Allah make clear to you (His law), lest ye err. And Allah hath knowledge of all things.
They ask you for a decision of the law. Say: Allah gives you a decision concerning the person who has neither parents nor offspring; if a man dies (and) he has no son and he has a sister, she shall have half of what he leaves, and he shall be her heir she has no son; but if there be two (sisters), they shall have two-thirds of what he leaves; and if there are brethren, men and women, then the male shall have the like of the portion of two females; Allah makes clear to you, lest you err; and Allah knows all things.
They ask thee for a pronouncement. Say: Allah hath pronounced for you concerning distant kindred. If a man die childless and he have a sister, hers is half the heritage, and he would have inherited from her had she died childless. And if there be two sisters, then theirs are two-thirds of the heritage, and if they be brethren, men and women, unto the male is the equivalent of the share of two females. Allah expoundeth unto you, so that ye err not. Allah is Knower of all things.

This is the Last Ayah Ever Revealed, the Ruling on Al-Kalalah

"The Messenger of Allah came visiting me when I was so ill that I fell unconscious. He performed ablution and poured the remaining water on me, or had it poured on me. When I regained consciousness, I said, `I will only leave inheritance through Kalalah, so what about the inheritance that I leave behind.'

The Two Sahihs and also the Group recorded it.

In one of the wordings, Jabir said that the Ayah on inheritance was revealed;

They ask you for a legal verdict. Say: "Allah directs (thus) about Al-Kalalah.

The wording of the Ayah indicates that the question was about the Kalalah, قُلِ اللّهُ يُفْتِيكُمْ (Say: "Allah directs (thus)...).

We mentioned the meaning of Kalalah before, that it means the crown that surrounds the head from all sides. This is why the scholars stated that;

Kalalah pertains to one who dies and leaves behind neither descendants, nor ascendants.

the Kalalah pertains to one who has no offspring, as the Ayah states.

If it is a man that dies, leaving no child,

The meaning and ruling of Kalalah was somewhat confusing to the Leader of the Faithful Umar bin Al-Khattab.

It is recorded in the Two Sahihs that Umar said,

"There are three matters that I wished the Messenger of Allah had explained to us, so that we could abide by his explanation. They are:

a certain type of Riba.''

"There is nothing that I asked the Messenger of Allah about its meaning more than the Kalalah, until he stabbed me with his finger in my chest and said,

The Ayah that is in the end of Surah An-Nisa' should suffice for you.''

Ahmad mentioned this short narration for this Hadith, Muslim recorded a longer form of it.

The Meaning of This Ayah

If it is a man that dies.

Therefore, everything and everyone dies and perishes except Allah, the Exalted and Most Honored.

Whatsoever is on it (the earth) will perish. And the Face of your Lord full of majesty and honor will remain forever. (55:26-27)

referring to the person who has neither children, nor parents.

What testifies to this, is that Allah said afterwards,

Leaving a sister, she shall have half the inheritance.

Had there been a surviving ascendant, the sister would not have inherited anything, and there is a consensus on this point.

Therefore, this Ayah is referring to the man who dies leaving behind neither descendants nor ascendants, as is apparent for those who contemplate its meaning. This is because when there is a surviving parent, the sister does not inherit anything, let alone half of the inheritance.

Ibn Jarir and others mentioned that;

Ibn Abbas and Ibn Az-Zubayr used to judge that if a person dies and leaves behind a daughter and a sister, the sister does not inherit anything. They would recite, إِنِ امْرُؤٌ هَلَكَ لَيْسَ لَهُ وَلَدٌ وَلَهُ أُخْتٌ فَلَهَا نِصْفُ مَا تَرَكَ (If it is a man that dies, leaving a sister, but no child, she shall have half the inheritance).

if one leaves behind a daughter, then he has left behind a child. Therefore the sister does not get anything.

The majority of scholars disagreed with them, saying the daughter gets one half and the sister the other half, relying on other evidence. This Ayah (4:176 above) gives the sister half of the inheritance in the case that it specifies.

As for giving the sister half in other cases, Al-Bukhari recorded that Sulayman said that Ibrahim reported to Al-Aswad that he said,

"During the time of the Messenger of Allah, Mu`adh bin Jabal gave a judgment that the daughter gets one half and the sister the other half.''

"Abu Musa Al-Ash`ari was asked about the case when there was a daughter, grand-daughter and sister to inherit.

He said, `The daughter gets one-half and the sister one-half.'

Go and ask Ibn Mas`ud, although I think he is going to agree with me.'

So Ibn Mas`ud was asked and was told about Abu Musa's answer, and Ibn Mas`ud commented, `I would have deviated then and would not have become among those who are rightly guided. I will give a judgment similar to the judgment given by the Prophet.

We went back to Abu Musa and conveyed to him Ibn Mas`ud's answer and he said, `Do not ask me (for legal verdicts) as long as this scholar is still among you.'''

... and he will be her heir if she has no children.

This Ayah means, the brother inherits all of that his sister leaves behind if she has no surviving offspring or parents. If she has a surviving parent, her brother would not inherit anything. If there is someone who gets a fixed share in the inheritance, such as a husband or half brother from the mother's side, they take their share and the rest goes to the brother.

It is recorded in the Two Sahihs that Ibn Abbas said that the Messenger of Allah said,

Give the Farai'd to its people, and whatever is left is the share of the nearest male relative.

If there are two sisters, they shall have two-thirds of the inheritance;

meaning, if the person who dies in Kalalah has two sisters, they get two-thirds of the inheritance. More than two sisters share in the two-thirds.

From this Ayah, the scholars took the ruling regarding the two daughters, or more, that they share in the two-thirds, just as the share of the sisters (two or more) was taken from the Ayah about the daughters, فَإِن كُنَّ نِسَاء فَوْقَ اثْنَتَيْنِ فَلَهُنَّ ثُلُثَا مَا تَرَكَ (if (there are) only daughters, two or more, their share is two thirds of the inheritance. (4:11)

if there are brothers and sisters, the male will have twice the share of the female.

This is the share that the male relatives (sons, grandsons, brothers) regularly get, that is, twice as much as the female gets.

His Law and set limits, clarifying His legislation,

Lest you go astray.

from the truth after this explanation.

And Allah is the All-Knower of everything.

Allah has perfect knowledge in the consequences of everything and in the benefit that each matter carries for His servants. He also knows what each of the relatives deserves from the inheritance, according to the degree of relation he or she has with the deceased.

Umar gathered the Companions of the Messenger of Allah once and said, "I will give a ruling concerning the Kalalah that even women will talk about it in their bedrooms.''

A snake then appeared in the house and the gathering had to disperse.

Umar commented, `Had Allah willed this (Umar's verdict regarding the Kalalah) to happen, it would have happened.''

The chain of narration for this story is authentic.

Umar bin Al-Khattab said, `Had I asked the Messenger of Allah regarding three things, it would have been better for me than red camels. They are:

who should be the Khalifah after him;

about a people who said, `We agree to pay Zakah, but not to you (meaning to the Khalifah),' if we are allowed to fight them;

Al-Hakim said, "Its chain is Sahih according to the Two Sheikhs, and they did not recorded it.''

Ibn Jarir also said that it was reported that Umar said,

"I feel shy to change a ruling that Abu Bakr issued. Abu Bakr used to say that the Kalalah is the person who has no descendants or ascendants.''

Abu Bakr's saying is what the majority of scholars among the Companions, their followers and the earlier and later Imams agree with. This is also the ruling that the Qur'an indicates. For Allah stated that He has explained and made plain the ruling of the Kalalah, when He said, يُبَيِّنُ اللّهُ لَكُمْ أَن تَضِلُّواْ وَاللّهُ بِكُلِّ شَيْءٍ عَلِيمٌ ((Thus) does Allah makes clear to you (His Law) lest you go astray. And Allah is the All-Knower of everything).

This is the end of the Tafsir of Surah Al-Nisa'. Allah, may He be glorified and exalted, is the Guide to the right way.