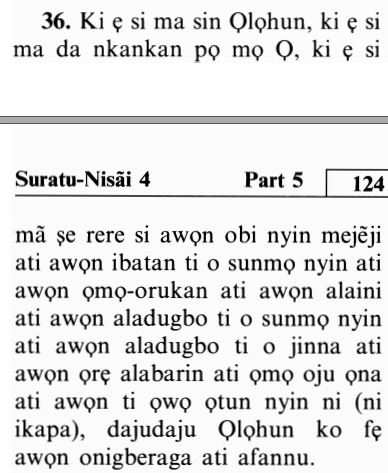 Serve Allah, and join not any partners with Him; and do good- to parents, kinsfolk, orphans, those in need, neighbours who are near, neighbours who are strangers, the companion by your side, the wayfarer (ye meet), and what your right hands possess: For Allah loveth not the arrogant, the vainglorious;-
And serve Allah and do not associate any thing with Him and be good to the parents and to the near of kin and the orphans and the needy and the neighbor of (your) kin and the alien neighbor, and the companion in a journey and the wayfarer and those whom your right hands possess; surely Allah does not love him who is proud, boastful;
And serve Allah. Ascribe no thing as partner unto Him. (Show) kindness unto parents, and unto near kindred, and orphans, and the needy, and unto the neighbour who is of kin (unto you) and the neighbour who is not of kin, and the fellow-traveller and the wayfarer and (the slaves) whom your right hands possess. Lo! Allah loveth not such as are proud and boastful,

Worship Allah and join none with Him in worship,

Allah orders that He be worshipped Alone without partners, because He Alone is the Creator and Sustainer Who sends His favors and bounties on His creation in all situations and instances. Therefore He deserves to be singled out, without associating anything or anyone from His creation with Him in worship.

Indeed, the Prophet said to Mu`adh,

Do you know what Allah's right on His servants is?

That they should worship Him and should not worship any others with Him.

The Prophet then said,

Do you know what the right of the servants on Allah is if they do this He should not punish them.

and do good to parents,

Allah joins the order to worship Him with being dutiful to parents in many places. For example, He said,

And your Lord has decreed that you worship none but Him. And that you be dutiful to your parents). (17:23)

After Allah ordained being dutiful to parents, He ordained kind treatment of relatives, males and females.

because they lost their caretakers who would spend on them. So Allah commands that the orphans be treated with kindness and compassion.

who have various needs and cannot find what sustains these needs. Therefore, Allah commands they should be helped in acquiring their needs in a sufficient manner that will end their inadequacy.

We will further elaborate on the matter of the destitute and the poor in Surah Bara'h (9:60).

The Right of the Neighbor

"The neighbor who is also a relative,''

while, وَالْجَارِ الْجُنُبِ (The neighbor who is a stranger) means,

Mujahid was also reported to have said that Allah's statement, وَالْجَارِ الْجُنُبِ (the neighbor who is a stranger) means,

"The companion during travel.''

There are many Hadiths that command kind treatment to the neighbors, and we will mention some of them here with Allah's help.

Jibril kept reminding of the neighbor's right, until I thought that he was going to give him a share of the inheritance.

The Two Sahihs recorded this Hadith.

Jibril kept reminding me of the neighbor's right, until I thought he was going to appoint a share of the inheritance for him.

Abu Dawud and At-Tirmidhi recorded this Hadith, which At-Tirmidhi said was "Hasan Gharib through this route.''

The Fourth Hadith Imam Ahmad recorded that Al-Miqdad bin Al-Aswad said that the Messenger of Allah asked his Companions,

What do you say about adultery?

They said, "It is prohibited, for Allah and His Messenger have prohibited it. So it is forbidden until the Day of Resurrection.''

What do you say about theft?

They said, "It is prohibited, for Allah and His Messenger prohibited it.''

If a man steals from his neighbor, it is worse for him than stealing from ten homes.

Only Ahmad recorded this Hadith.

A similar Hadith is recorded in the Two Sahihs, Ibn Mas`ud said,

"I asked, `O Allah's Messenger! What is the greatest sin?'

To make a rival for Allah while He Alone created you.

To commit adultery with your neighbor's wife.''

Aishah asked the Messenger of Allah, "I have two neighbors, so whom among them should I give my gift?''

The neighbor whose door is the closest to you.

We will elaborate on this subject in the Tafsir of Surah Bara'h, Allah willing and upon Him we depend.

the companion by your side, the wayfarer (you meet),

Being Kind to Slaves and Servants

and those (slaves) whom your right hands possess,

this is an order to be kind to them because they are weak, being held as captives by others.

An authentic Hadith records that;

during the illness that preceded his death, the Messenger of Allah continued advising his Ummah:

He was repeating it until his tongue was still.

What you feed yourself is a Sadaqah (charity) for you,

what you feed your children is Sadaqah for you,

what you feed your wife is Sadaqah for you,

what you feed your servant is Sadaqah for you.

An-Nasa'i recorded this Hadith which has an authentic chain of narration, all the thanks are due to Allah. `

Abdullah bin `Amr said to a caretaker of his,

"Did you give the slaves their food yet?''

Ibn `Amr said, "Go and give it to them, for the Messenger of Allah said,

It is enough sin for someone to prevent whomever he is responsible for from getting their food. ''

The slave has the right to have food, clothing and to only be required to perform what he can bear of work.

When your servant brings meals to one of you, if he does not let him sit and share the meal, then he should at least give him a mouthful or two mouthfuls of that meal or a meal or two, for he has prepared it.

This is the wording collected by Al-Bukhari.

Verily, Allah does not like such as are proud and boastful.

meaning, one who is proud and arrogant, insolent and boasts to others. He thinks that he is better than other people, thus thinking high of himself, even though he is insignificant to Allah and hated by people.

Allah's statement, إِنَّ اللّهَ لاَ يُحِبُّ مَن كَانَ مُخْتَالاً (Verily, Allah does not like such as are proud) means arrogant, while, فَخُورًا (boastful) means boasting about what he has, while he does not thank Allah.

This Ayah indicates that such a person boasts with people about the bounty that Allah has given him, but he is actually ungrateful to Allah for this bounty.

"You will find that those who are mean are also proud and boasting. He then recited, وَمَا مَلَكَتْ أَيْمَانُكُمْ (and those (slaves) whom your right hands possess).

You will find that he who is undutiful (to parents) is also arrogant, and deprived. He then recited, وَبَرًّا بِوَالِدَتِي وَلَمْ يَجْعَلْنِي جَبَّارًا شَقِيًّا (And dutiful to my mother, and made me not arrogant, deprived). (19:32)

Once a man asked the Prophet,

"O Messenger of Allah, advise me.'

Avoid lengthening the dress (below the ankles), for this practice is from arrogance. Verily, Allah does not like arrogance.''