BROTHER - BROTHERHOOD, CHILDREN, FACTION, GARDEN, THE (I. E. PARADISE), HEART, HYPOCRITES (MUNAFIQUN), LAST DAY, THE (QIYAMAH), LOVE, OBEDIENCE / DISOBEDIENCE TO THE MESSENGERS, AND THE OBLIGATION OF THE MESSENGERS, RIVER, SUCCESS 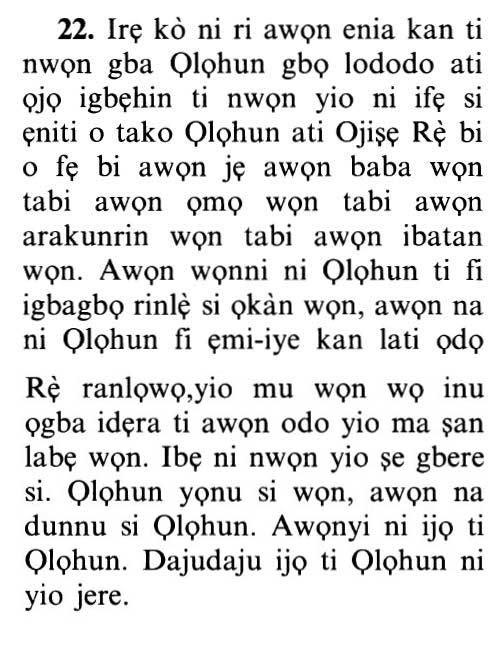 (Thou wilt not find folk who believe in Allah and the Last Day loving those who oppose Allah and His messengerﾅ) [58:22]. Said Ibn Jurayj: ﾓIt was related to me that Abu Quhafah insulted the Prophet, Allah bless him and give him peace, and as a result Abu Bakr [his son] struck him with such force that he fell to the ground. Abu Bakr mentioned this to the Prophet, Allah bless him and give him peace, who exclaimed: Did you really do it?ﾒ Abu Bakr said: Yes!ﾒ In that case do not do it again!ﾒ said the Prophet, Allah bless him and give him peace. Abu Bakr said: By Allah, if a sword were at my reach I would have killed him!ﾒ And so Allah, glorified and exalted is He, revealed this verseﾔ. It is also related that Ibn Masud said: ﾓThis verse was revealed about Abu Ubaydah ibn al-Jarrah who killed his father Abd Allah at the Battle of Uhudﾔ. It was also revealed about Abu Bakr who challenged his own son for a duel at the battle of Badr. He said: ﾓO Messenger of Allah, let me be among the first group [of martyrs]ﾔ. The Messenger of Allah, Allah bless him and give him peace, said to him: ﾓPreserve yourself for us, O Abu Bakr! Do you not know that you are to me like my hearing and sight?ﾔ The verse was also revealed about Musab ibn Umayr who killed his brother Umayr ibn Umayr at the battle of Uhud. And it was also revealed about Umar [ibn al-Khattab] who killed his maternal uncle al-As ibn Hisham ibn al-Mughirah at the battle of Badr. And it was also revealed about Ali, Hamzah and Ubaydah who killed Utbah ibn Rabiah, Shaybah ibn Rabiah and al-Walid ibn Utbah respectively at the battle of Badr. Hence His words (even though they be their fathers or their sons or their brethren or their clan).

The Believers do not befriend the Disbelievers

You will not find any people who believe in Allah and the Last Day, making friendship with those who oppose Allah and His Messenger, even though they were their fathers or their sons or their brothers or their kindred.

Meaning, do not befriend the deniers, even if they are among the closest relatives.

Let not the believers take the disbelievers as friends instead of the believers, and whoever does that will never be helped by Allah in any way, except if you indeed fear a danger from them. And Allah warns you against Himself. (3:28),

Say: If your fathers, your sons, your brothers, your wives, your kindred, the wealth that you have gained, the commerce in which you fear a decline, and the dwellings in which you delight are dearer to you than Allah and His Messenger, and striving hard and fighting in His cause, then wait until Allah brings about His decision (torment).

And Allah guides not the people who are the rebellious. (9:24)

Sa`id bin `Abdul-`Aziz and others said that this Ayah,

You will not find any people who believe in Allah and the Last Day...

was revealed in the case of Abu Ubaydah Amir bin Abdullah bin Al-Jarrah when he killed his disbelieving father, during the battle of Badr. This is why when Umar bin Al-Khattab placed the matter of Khilafah in the consultation of six men after him, he said; "If Abu Ubaydah were alive, I would have appointed him the Khalifah.''

It was also said that the Ayah,

وَلَوْ كَانُوا آبَاءهُمْ (even though they were their fathers), was revealed in the case of Abu Ubaydah, when he killed his father during the battle of Badr,

أَوْ أَبْنَاءهُمْ (or their sons) was revealed in the case of Abu Bakr As-Siddiq when he intended to kill his (disbelieving) son, Abdur-Rahman, (during Badr),

أَوْ إِخْوَانَهُمْ (or their brothers) was revealed about the case of Mus`ab bin `Umayr, who killed his brother, Ubayd bin Umayr, during Badr,

and that the Ayah,

أَوْ عَشِيرَتَهُمْ (or their kindred) was revealed about the case of Umar, who killed one of his relatives during Badr, and also that this Ayah was revealed in the case of Hamzah, Ali and Ubaydah bin Al-Harith. They killed their close relatives Utbah, Shaybah and Al-Walid bin Utbah that day.

A similar matter is when Allah's Messenger consulted with his Companions about what should be done with the captives of Badr.

Abu Bakr As-Siddiq thought that they should accept ransom for them so the Muslims could use the money to strengthen themselves. He mentioned the fact that the captured were the cousins and the kindred, and that they might embrace Islam later on, by Allah's help.

"But I have a different opinion, O Allah's Messenger! Let me kill so-and-so, my relative, and let Ali kill Aqil (Ali's brother), and so-and-so kill so-and-so. Let us make it known to Allah that we have no mercy in our hearts for the idolators.''

For such He has written faith in their hearts, and strengthened them with Ruh from Himself.

means, those who have the quality of not befriending those who oppose Allah and His Messenger, even if they are their fathers or brothers, are those whom Allah has decreed faith, meaning, happiness, in their hearts and made faith dear to their hearts and happiness reside therein.

As-Suddi said that the Ayah,كَتَبَ فِي قُلُوبِهِمُ الْإِيمَانَ (He has written faith in their hearts), means,

"He has placed faith in their hearts.''

Ibn Abbas said that, وَأَيَّدَهُم بِرُوحٍ مِّنْهُ (and strengthened them with Ruh from Himself), means,

"He gave them strengths.''

was explained several times before.

contains a beautiful secret. When the believers became enraged against their relatives and kindred in Allah's cause, He compensated them by being pleased with them and making them pleased with Him from what He has granted them of eternal delight, ultimate victory and encompassing favor.

indicates that they are the party of Allah, meaning, His servants who are worthy of earning His honor.

This is the end of the Tafsir of Surah Al-Mujadilah. All praise and thanks are due to Allah.