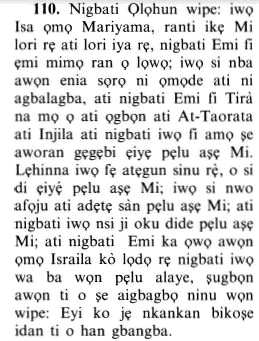 Reminding `Isa of the Favors that Allah Granted him

(Remember) when Allah will say (on the Day of Resurrection): "O `Isa, son of Maryam!

Allah mentions how He blessed His servant and Messenger, `Isa, son of Maryam, and the miracles and extraordinary acts He granted him.

Remember My favor to you,

when I created you from your mother, without male intervention, and made you a sign and clear proof of My perfect power over all things.

And to your mother,

when I made you testify to her chastity and you thus absolved her from the sin that the unjust, ignorant liars accused her of.

when I supported you with Ruh-il-Qudus,

the angel Jibril, and made you a Prophet, calling to Allah in the cradle and manhood. I made you speak in the cradle, and you testified that your mother was free from any immoral behavior, and you proclaimed that you worship Me. You also conveyed the news of My Message and invited them to worship Me.

so that you spoke to the people in the cradle and in maturity;

Meaning you called the people to Allah in childhood and in maturity.

And the word Tukallim means invited, because his speaking to people while a child is nothing strange by itself.

(And when I taught you the Book and the Hikmah,) the power of writing and understanding,

(and the Tawrah,) which was revealed to Musa, son of `Imran, who spoke to Allah directly.

and when you made out of the clay, as it were, the figure of a bird, by My permission,

and you breathed into it, and it became a bird by My permission,

after you blew into it'. Then, it became a flying bird with a soul by Allah's permission.

and you healed those born blind, and the lepers by My permission,

This was explained before in Surah Al Imran and we do not need to repeat it here.

And when you brought forth the dead by My permission,

meaning, you called them and they rose from their graves by Allah's leave, power, intent and will. Allah said next,

and when I restrained the Children of Israel from you since you came unto them with clear proofs, and the disbelievers among them said: "This is nothing but evident magic.''

Meaning: `remember My favor, when I stopped the Children of Israel from harming you, when you brought them the clear proofs and evidence, testifying to your Prophethood and Message from Me to them. They rejected you and accused you of being a magician and tried to kill you by crucifixion, but I saved you, raised you to Me, purified you from their vulgarity and protected you from their harm.' The wording of this Ayah indicates that `Isa will be reminded of these favors on the Day of Resurrection.

Allah used the past tense in these Ayat indicating that it is a forgone matter that will certainly occur.

This Ayah also contains some of the secrets of the Unseen that Allah revealed to His Messenger Muhammad.